Thanks for a great 60 years with Eyman! 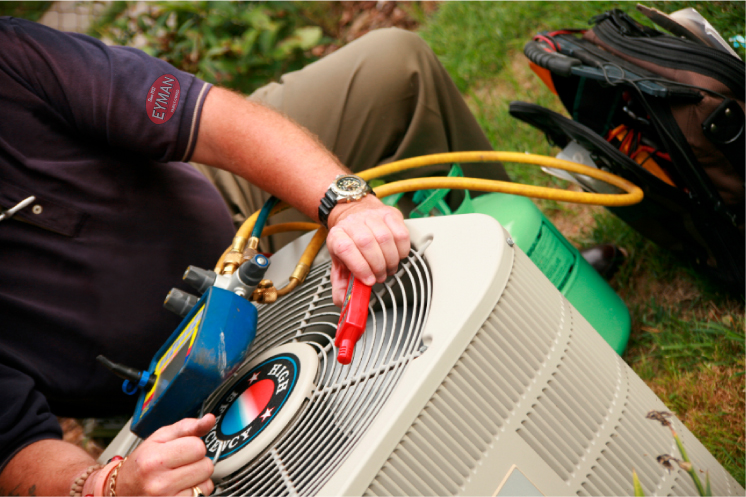 Eyman has been a family name you can trust for 60 years. We know what it takes to build a brand, and to build a community’s trust. It takes commitment to being the best, loyalty, and dedication to the families we serve.

One of the families we serve could have written the book on dedication and community. The Rotellas have been serving Omahans their favorite slice of bread since making their first deliveries by horse drawn carriage in 1921. Generations of breadmakers have learned the trade, and they understand what it takes to grow and sustain a family business.

Eyman is proud to be a member of the team that keeps Rotella’s running smoothly. For more than 20 years, the Eyman’s have been on the Rotella’s roster.

“We wouldn’t think of calling anyone else. They’re here. Almost before we call. We know they’re already on their way. They know how important every minute is to us.” John Rotella is the plant manager at the bread factory on 108th and Harrison. He sees the grit and the grime of the job, and he knows what Eyman is facing when they come out.

As the Rotella family has expanded, so has their brand, and their factory. When they decided to build onto their vast kitchen, they knew there was only one company for the job.

“Every day, we’re baking. The people in this city know the smell, it’s very unique to what we’re making for you. But every day, that’s flour and oil going through those pipes. If one thing goes wrong, it could go really wrong, really fast.”

The Eymans come out regularly to keep the system clean and in order, ensuring that nothing does suddenly go wrong. And even a minor issue or simple question, someone is on their way to make sure that the operation continues to run smoothly. The city of Omaha is counting on Rotellas to deliver the freshest, most delicious dough in Nebraska. Eyman is on the job to make sure that happens.

The Rotellas know about family, and the Eyman’s are proud to be on the Rotella team.

University of Nebraska Omaha: You Know UNO, But Did You Know…

When you have a plumbing repair or emergency in your home, it’s beyond inconvenient. Now imagine what happens in a plumbing emergency at a facility that houses thousands. That’s the task facing David Meradith, Chief Engineer and Facilities Manager at University of Nebraska at Omaha. With more than 15,000 students and several thousand staff members, David knows how much time and accuracy matters. There is no time for second or third chances, and his first call is always Eyman.

“When we call, we needed them here yesterday. We have plumbers on site, and they do a fantastic job, but by the time we know we need Eyman, it’s bad.” David explained. “And when the big stuff breaks, it’s always on the weekend. Always after hours. This is good for our students, when we don’t have to shut down a building during class — but it also means there have been times we make a call at 1am. And when we do, they’ve got a man on the job by 2am.”

“For our biggest problems, Tom comes out himself. He knows this stuff, and he makes sure his staff knows it, too. It’s still nice to know he cares enough to come himself to see the job done. They have never turned a job down. They have never said “we don’t know how to do that”, and there is no other company in Omaha nearly as diverse. They do everything, and they do it right.”

Eyman understands that the way you do business matters, and no matter how big your plumbing problem is, shutting down is a last resort, if it’s an option at all. What you do matters, and that matters to Eyman.

Their Will is Good: Goodwill Industries

Every October, Brett Karnes sends out a bid for maintenance and work on HVAC services. As facilities manager for Goodwill Industries, he has worked with many companies in Omaha, but has found himself returning to Eyman.

“We were noticing a trend when we used other companies. As the holiday season approached, they were routinely finding these big expensive problems. Things needed replaced that had seemed fine before. We had Eyman come out for a second opinion and everything was fine. The thing is, the other guys work on commission. Their techs make way more money if they can sell us something.”

“Eyman’s prices are always competitive, but when it came down to the service and what they were able to do for us, and how good they are to us. It’s really not a competition at all. Eyman is the best on customer service.”

“On price point, they’re great. On customer service, they really can’t be beat. They really can’t. But when it comes to trust, they’re it. I used to ask for second opinions on repairs, but with Eyman, I know that I can trust the techs. They’re as invested in the work as I am.”

Deb Girsh knows how many moving parts there are keeping the HyVee on 97th and Q running smoothly. She also knows what happens when those moving parts just… stop.

“No matter why we call them, Eyman is always here right away. And we have called them at all hours, and no matter how late, someone is here right away. And no matter how frustrated or frantic we are, everyone is always so friendly and calm. They know they can handle it. And after working with them for as long as we have, we see them here eating breakfast with us every weekend. They’re just part of our team, now.”

A recent remodel of the grocery store could be trusted to nobody else, and Eyman was up for the challenge!

“They did everything. Everything! And there was a lot to do. We remodeled the whole facility.”

Girsh chooses Eyman for HyVee because they are fast, never back down from a challenge, and perfection is standard practice.

She chooses Eyman for her home because the trust they have built with her. “My husband tries to fix everything himself, but we always have them come out. There’s nobody else I’d want in my home. They come in and you just feel like a friend is over to help you with repairs. They even clean up, they have never left a mess!”

“The relationships that we’ve built, it started out as just really believing they were on our team. Then it turned into friendship, and now they’re part of our family. That’s not common, and I know it’s not something I could find somewhere else. I’d never choose anyone buy Eyman.”