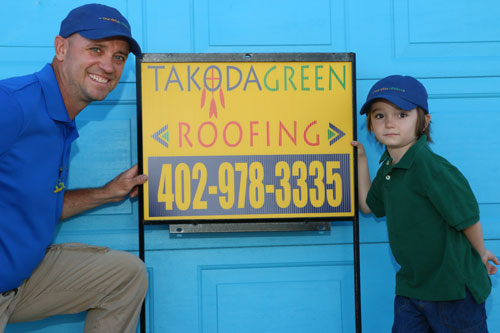 Takoda Green Roofing was incorporated in 2011 and has operated out of its Benson offices since just 2012, but owner Jason Starkey brings 13 years of solid roofing experience to the table plus a wealth of prior knowledge gained from a lifetime in the field of home construction and improvement: excavation, landscaping, remodeling and repair, and even flooring and countertops.

“I believe people appreciate my knowledge and my background and experience. I know a lot about a home’s structure, landscape, interior and exterior—not just the roof—so when I meet with people, I can discuss most aspects of their home with them,” Starkey says.

Takoda Green Roofing is also licensed for asbestos roof tile removal, a specialty service in demand in older neighborhoods with 1930s through 1970s construction. In addition, the company can install class 4 impact-resistant roofing products, something any Nebraskan who’s dealt with hail damage can appreciate. Plus, Takoda Green Roofing is also a Tile Roofing Institute-trained installer and an IKO ShieldPRO plus+ Program certified contractor.

The “green” in the company name refers to Starkey’s conscientious efforts to “reduce, reuse and recycle” in both his business practices and personal household, from coordinating scrap metal salvage to recycling office paper and using a faucet filter instead of buying bottled water. “If everybody would do a little to be green every day, it would make a difference,” he explains.

The array of services provided by Takoda Green Roofing is impressive, but Starkey says he aspires to run his business with strong principles and a high degree of integrity. Starkey has years of experience handling insurance claims for storm repair and is willing to take on jobs that other companies typically pass over. Additionally, “We won’t get paid until you are you are completely satisfied with our workmanship and service,” he says.

Customers say the business has earned their loyalty not just for quality work, but also because of Starkey’s warm and welcoming personality. Takoda is a Lakota Sioux word meaning “friend of everyone” and the name of the business— which was coined by Starkey’s wife, DeAnna—also encapsulates the business owner, who puts the word “friendly” right up front in his mission statement “to provide friendly, quality service at quality prices.” Starkey isn’t afraid to get his hands dirty—literally—by picking up some of the labor himself (especially wood repair tasks) and he personally supervises every job that Takoda Green Roofing undertakes. Starkey’s affable manner also means that he has cultivated great connections.

“If I can’t do something, I know somebody who can,” Starkey says. “I’m a source of contacts; I help people all the time by knowing electricians and plumbers and other contractors.” His suppliers include RCI Roofing Supply Company Inc., whose main office is in Omaha. Starkey says he’s a big believer in supporting the local economy, and makes a point of hiring local specialists and subcontractors whenever he can. Although Starkey is certainly willing to travel outside the city, due to personal recommendations from pleased customers, the bulk of Takoda Green Roofing’s work takes place in the greater metro area, with many projects in and around Benson.

“I’m just the small guy, and people like to support the community,” he says. “You get back from your community what you put into your community.”

And Starkey follows suit in a tangible way. He lives in a Benson neighborhood and Takoda’s offices are located just blocks away under the watch of office manager Janelle Grieco (known in the neighborhood for also serving as vice chairman of the Benson Farmers Market). Some of the local groups he supports include Omaha Home for Boys, Benson Farmers Market, and Nebraska Youth Rugby. Starkey also coaches youth rugby, and now that daughter Aspen is a year old and his son Takoda (yes, the business was named for him) is almost five years old and enrolled in school, Starkey’s family has begun to get involved with and support St. Bernard School, too.

Starkey says he dreamed “my whole life” of owning a business, and although he first began working independently as a contractor in 2002, he feels he has finally accomplished his long-held vision with Takoda Green Roofing.

“No matter what you do in life, you just don’t ever give up,” Starkey says. “If you put your mind to it, you can accomplish great things.”