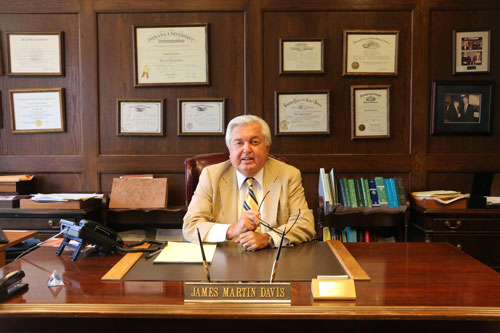 Once again, and for eight years in a row, James Martin Davis was voted Omaha’s Best Criminal Lawyer. This larger-than life attorney is a highly decorated Vietnam combat veteran and a former U.S. Secret Service special agent. He led an Organized Crime and Anti-Corruption State Task Force, ran for the U.S. Congress and is Nebraska’s most widely known trial lawyer. Davis is one of the American Trial Lawyers’ “Top 100 Lawyers,” is listed in the National Bar Registry of Pre-Eminent Lawyers, is a Great Plains Super Lawyer and was recognized this year as the city’s top criminal lawyer in Omaha’s first edition of “The Faces of Omaha.”

JMD, as he is known by the media and the legal communities, has successfully won myriad high-profile cases. His clients have ranged from TV anchors and reporters to corporate CEOs and bank presidents. Davis has represented local politicians, past and current police chiefs and officers, Cornhusker football players and union presidents, as well as fellow lawyers and courthouse employees. When Boys Town was hit with half a dozen lawsuits, Father Val Peter, its president, picked JMD. “Davis represents the underdog, and we are the underdog.” Davis won each of those lawsuits.

Davis also represents clients in large personal injury cases. For a time, Davis held the record for the largest jury verdict for a wrongful death ever awarded in Nebraska. This past year, he settled a case against the State of Nebraska for $1 million, as well as a student drowning case against the Omaha Public School system for $250,000. He has appeared on numerous national television shows. Davis was featured on “The Today Show,” “Good Morning America,” the CBS morning and evening news, Bill O’Reilly’s “No Spin Zone,” “Inside Edition,” “Current Affairs” and several HBO and Discovery Channel documentaries.

PUT IT TO A VOTE

Despite his success in civil litigation, Davis’ first love is trying criminal cases before a jury. There, he says, “I am able to protect the Constitution one citizen at a time.” After each courtroom victory, Davis and

his staff hold a ritual victory dinner. Everyone lifts their glass as Davis proposes his toast: “Here’s to the two sweetest words in the English language: ‘Not Guilty.’”