Home » Dish » A 12 Hour Culinary Tour of the World 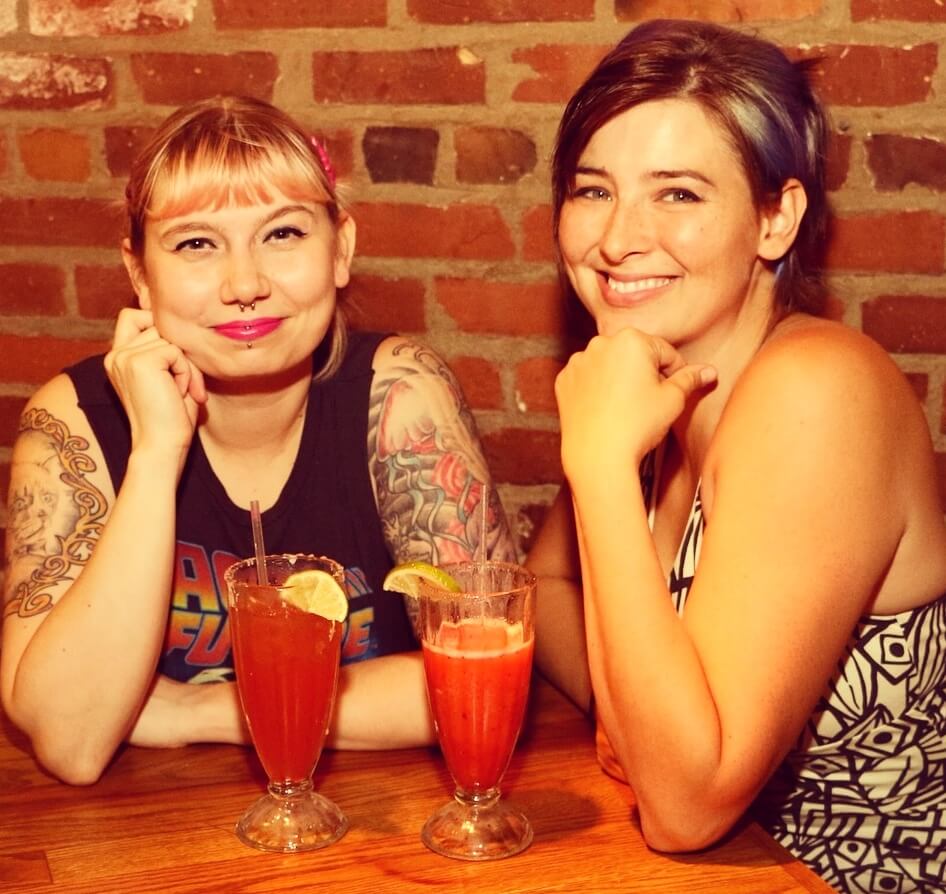 Once upon a time, in a tiny apartment kitchen in Dundee, my friend Angie Anaya and I developed a thing for cooking. Our relationship with food and flavor transcended the standard bickering and communication issues that plague every other relationship. A misread text or hastily spoken slight could be overcome with a living room picnic of pollo asada or pumpkin lasagna. It was a simpler time before family and career took the place of weekend Netflix sessions and meatloaf cupcakes with mashed potato frosting.

In 2010, I decided that Angie deserved the best birthday my meager budget could afford her. Knowing that her favorite things in life were food and travel, I planned a culinary tour of the world. Having an expired passport and mostly good intentions to spend on this trip, I decided to keep it local. I woke her with a pot of African Violets, pastry from a nearby patisserie, coffee from a now-closed Cuban café, and whisked her off for a Swedish massage. A trip to a pub for a pint and corned beef sandwich, an Italian place for espresso and tiramisu, then a quick hop to a Greek eatery for Saganaki (flaming brick of cheese) and shot of ouzo. By then we were ready for margaritas before a French Bistro for dinner and capping the night off with sake. Different friends from her remarkably diverse life met us in different ‘regions’, ensuring a drama-free evening with many wallets to handle the burden of the bill.

Catching up last weekend, we laughed at some of the restaurants we visited- it was a time when taco pizza made the cut as Italian/Mexican fusion. Angie has had an already-storied career in Omaha’s food scene since then. After attending the culinary program at Metro, she found herself helping launch Salt 88, cooking at Plank, Taxi’s,  and Market Pantry, and is now a pastry chef at Modern Love. Although not a vegan herself, she is currently developing a line of vegan cheeses, breads, and desserts for the infamous eatery. Her passion for elevating flavor is instantly evident as she begins to describe her slow and scientific method for creating cheeses. Enzymes, fermentation, chemical reactions. She closes her eyes and begins playing an invisible instrument with her hands as she talks about a line of ice cream she’s working on. She describes her flavors the way a mother describes her child’s face.

We are certainly older (and arguably wiser) than we were in the days of living room picnics- but one thing lead to another and we found ourselves reimagining our tour with what we now know about the diversity of Omaha’s food landscape.

The first stop on Angie and Sara’s Tour of The World (2.0) is for a quick jolt of java. A hot cup of Kenyan at the trendy, farmer-friendly Archetype at Midtown sets the right tone for the adventures one faces in any given day. The shop has an excellent energy, and the friendly staff is as much a reason to walk in as the hot cup of go-go juice. The mission statement of Archetype is very grower-centric and each cup comes with a complimentary serving of good karma!

A fresh batch of Kolaches is already waiting for us at Great Harvest Bread in Dundee, where the sweet lady behind the counter carves a warm loaf of cinnamon chip bread for us to sample. Like the fat kid I truly am, I smash cheese and rhubarb kolaches together to eat like a sandwich. Angie chooses the strawberry and apricot and eats like a real lady, but I know this façade won’t last. We have work to do!

Having infinite German options in Omaha, we finally settle on a beer and Bavarian pretzel in Huber Haus at Crescent Moon. The imported, oven baked pretzel is served with warm queso for anyone who doesn’t find the soft, salty staple sufficiently flavorful. After agonizing over the beer list for far longer than my schedule allows, I order the New Belgium Pumpkick to wash down an order of fried pickle chips. Greasy, crisp, and tangy, the chips are served with a cooling sauce and hit the spot. The loud, indecipherable chatter of the full dining area lends itself to the feeling of a family gathering, and the festive air stays with us long after we have departed.

We set out to find an exceptional Italian dessert and end up at Enzo’s. Having only just opened in June, Chef/Owner Enzo Zurlo has already buckled under the pressure of his diners to extend his hours to accommodate their craving. I order the tiramisu, but can’t contain my lust as I peruse the menu. One bite into the perfectly constructed coffee and ricotta daydream I momentarily forget about the dizzying fresh pasta menu, and accept that the heavenly smell of pizza Napoli will just have to wait for another day.

After years of exhaustive research, we have come to the conclusion that most margaritas are basically the same. If you find a place that uses pure agave, you’re going to have a good time. On this particular excursion, we decided to try the brand new El Parian Downtown. A check of the website showed they were open, but as we stood outside the dark restaurant with the sun sinking low, it was evident we weren’t going to be sitting down. A call to the defunct number on the site deepens our disappointment. I later learned that the website is all incorrect, and if you want to get in touch with the restaurant, you need to call the number on their Facebook page. I look forward to trying the restaurant in the future!

We swallow our sadness and go with plan B: wander the Old Market to find a place we’ve never tried. We find Trini’s in The Passageway and sit down excited. I decide on a chili cocoa I find on the menu, but the waitress looks at me like I have bugs crawling out of my eyes and informs me that they aren’t serving chili that day. Several attempts to clarify only frustrate her further, so we settle on strawberry margaritas. While the view is amazing, the nachos we ordered and the slow, confused service take the establishment off of any future to-do lists for us. Angie interjects that if she is going out for Mexican, she can be found at Rivera’s at 12047 Blondo. My own top contender is Hector’s on 3007 S 83rd. We agree that a Margarita battle is in our near future and move on.

When I think of my favorite appetizers, I head straight to The Greek Islands for a flaming Saganaki. The dish is baked gooey and warm, then bathed in brandy and ignited at your table before being extinguished with a squirt of lemon and served with warm bread. My words can do nothing to oversell this dish, so just go to 3821Center and enjoy.

We have somehow managed to stay interested in flavor through this delicious day, and settle in at Dario’s French Bistro (4920 Underwood Ave) around 7pm. We resist a dozen or so obscenely tempting dishes (croque monsieur, crepes, moules platter) and opt for a warm bowl of French Onion Soup and Pomme Frites. A beer float is a whimsical twist in such a sophisticated setting, and we agree we could easily enjoy the rest of our evening here- but we leave for one last adventure.

I Need A Hiro

A quick stop at Hiro 88 (1308 Jackson) for Sake shots to toast a successful journey around the world in just 12 hours!