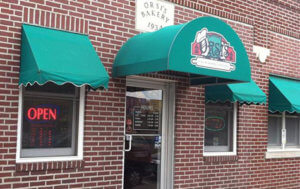 Jim Hall appreciates what a touchtone Little Italy landmark he owns in Orsi’s Italian Bakery & Pizzeria. Though not Italian, the 60-year-old is a paisan in every other sense. He started there when he was 8 years old, helping to make deliveries, and became a close friend and trusted worker of the namesake Orsi clan.

Marking 100 years in 2019, Orsi’s is a last vestige of a neighborhood whose gentrification trades on rich ethnic history. With all but one traditional Little Italy restaurant gone and no Italian market nearby, Orsi’s enjoys the sweet spot as purveyor of authentic, old-world fare.

The city’s other major Italian bakery, Rotella’s, long competed with Orsi’s for patronage. Folks grew up loyal to one brand or the other. Since Rotella’s left Little Italy for the suburbs and went commercial mass-production, Orsi’s has had the local artisan field to itself

“Ours is an all handmade (tossed) product,” said Hall. “Some people don’t look at quality as much as price, but there are always stalwarts who want the quality.”

That quality is all in the dough. The ingredients are simple enough: yeast, salt, water and high-gluten wheat flour. But it’s the small batch, time-tested care and craft that give the classic Italian twist its signature chew.

“I know the bread’s an outstanding bread,” Hall said.
“People come from all over to buy it. People that grew up around here and now live far away make the drive down because it’s something special they can’t get anywhere else. The same with the pizza, the garlic bread and the garlic cheese bread.”

Dave Lassek makes the pilgrimage from 168th and Blondo. “Their pizza and bread dough is the best,” said Lassek, who stopped to get dough for a homemade pizza his wife was making for Father’s Day.

Pat Smith’s been a devoted customer since the 1950s.
Why? “Because they’ve got the best bread in town.”

“The bread’s like our calling card,” Hall said, “but more and more people are finding out about the pizza. Pizza pays the bills.”

Orsi’s is No.1 on Trip Advisor for pizza places in Omaha. Small wonder given its distinctive Romano-Mozzarella cheese mix and slow-cooked, homemade Sicilian sauce thick with tomato paste, olive oil and fresh garlic.

Unlike some fresh foods with a long history, Orsi’s has remained constant despite ownership changes.

“They still use the original recipes,” fan Mary Thompson said.

“It’s the same ingredients we used when I was a kid back in the 1960s when I learned how to make it,” Hall said. “There’s no change in it. No preservatives. Preservatives will give you longer shelf life but will change the flavor and the texture – and what people want is that texture. It’s crispy, crunchy on the outside and soft inside. It’s why it comes out so good for toast.”

The dough contains no sugar or milk either. That purity is why Orsi’s can’t be found in stores. Since its products don’t turn over fast enough to retain freshness, stores get credited for unsold loaves. There’s no margin in niche-supplying, far-flung grocers. Thus, pilgrims must come to mecca for their fix. 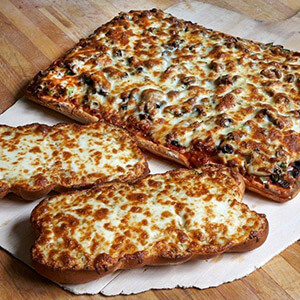 Fresh, sometimes still warm bread from the oven guarantees the unmistakable texture and aroma you can only get at Orsi’s.

Between Hall and his mates, the bakers have hundreds of years on the line.

“Some of us have worked together since we were kids,” Hall said. “We all take pride in what we’re making because we want it to come out the way we remember.”

“I wasn’t the fastest, but I was good at everything I did
because I made sure I learned it the right way,” Hall said. “I was taught it’s more about being consistent than fast because fast doesn’t always mean good.”

Hall cultivates customer stories that tell of Sunday mornings when folks come after church for fresh bread to go with their Sunday pasta dinner. There’s nothing like dipping a piece into nanna’s sauce. Some loaves don’t even make it home.

“People come down for a hot loaf of bread in the winter, stuff it up under their shirt, bring butter and a knife, pull it apart, butter it up, and eat it on the way home,” Hall said.

Until well into the 1970s, Orsi’s didn’t offer a sliced loaf. You can still get a whole by request.

Hall savors the memories and traditions.

“I try to be a good steward and keep the tradition going – and make it even better. That’s why I took it over (in 2010) because I didn’t want to see it end before the hundred years. Just in my time here, three to four generations have come through. I might not know all their names, but I know a lot of the faces.”

The lobby features photos that speak to the history.

“A lot of them are from guys that worked at the bakery as kids or that grew up with the Orisis or went to St. Frances Cabrini or St. Anne’s. This is where they can see themselves. It’s another thing they can count on that’s still here.”

It could have all ended in 1997 when fire gutted the place, but the community pitched in to bring it back.

“There were fundraisers. Some local, smaller bakeries – Olsen’s, Emminger’s, Ferd’s – let us use their production areas when they were in their down time so we could bake our products, still fill the grocery shelves and have revenue coming in,” Hall recalled. “The fire happened in February and we were back in August (in a new, updated, expanded structure).”

She and others say the bakery couldn’t have fallen to a better caretaker.

“Yeah, I hear it a lot from people,” Hall acknowledged.

As an entrepreneur, he’s boosted the pizzeria side and added value with a deli of imported meats, cheeses, homemade Italian sausage and gourmet olive oils and pastas. It’s filled the gap since Marino’s grocery closed.

Pat Smith echoes others in saying Orsi’s is “the best place to get Italian specialties.”

Long-in-the-works plans for a permanent dining section may finally come to fruition this fall.

Hall, whose wife Kathy does all the books, is an ever-present fixture at Orsi’s.

Even when employed at UPS and OPPD, he worked evenings and weekends at Orsi’s. He and Bob Orsi Jr. had it together before he bought out his shares.

“I’ve been here my whole life. Basically, the only time I was out was when I broke my knee in a car accident and I broke my neck in a fall.”

Even while wearing a halo drilled into his skull, he worked 70 to 75 hours a week.

“It gets frustrating because the work ethic and desire is not as much with younger people today.”

It’s why he surrounds himself with trusted old cronies.

Hall’s seen a surge in business from the area’s redevelopment boom.

“It’s just introducing more and more people to Orsi’s.
Once they taste it, they come back.”

No, the German-Austrian Hall isn’t Italian by blood, but
if anyone’s earned honorary Italian status, he has.