Home » Dish » A Night Out at Mojo Smokehouse 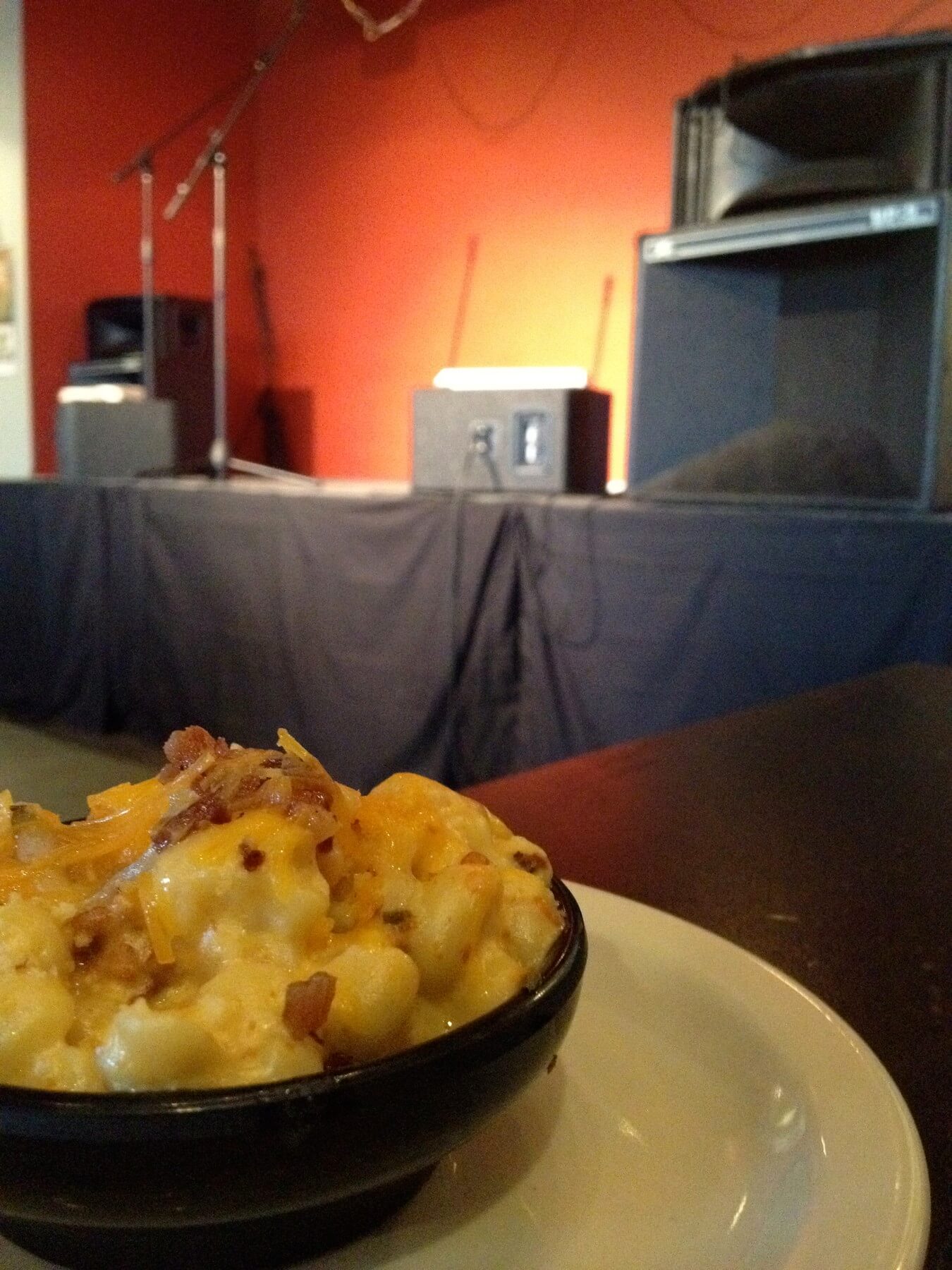 It was last summer that I started sensing the aroma of beef brisket after leaving the gym (or was it the movie theater?) at the ever-developing Aksarben Village. I followed my nose, and I found Mojo Smokehouse.

It’s been over a full year since Mojo started marking the area with the scent of their 12-hour-or-more smoked meats. But this isn’t your typical sloppy barbecue joint: There are no paper towel dispensers on the tables, and along with the tasty smoke, they also fill the air with live tunes – or live comedy – most nights of the week.

The inside is spacious and airy, and the reds, blacks, and silver chrome that dominate the interior scream “rock and roll;” not so much dirty, lo-fi garage, but more like refined, experienced, well-tuned rock and roll. Though the initial focus was to provide a cool place for college students to hang, the crowd is a mix of ages. Manager, co-owner, and UNO graduate Fletcher McMeen was inspired by the venerable Duffy’s Tavern in Lincoln (no doubt because his father is a former owner), and wanted to bring a similar vibe of live music and comedy nearer to the UNO campus. There is never a cover charge, a perk sure to attract students – as well as the rest of us.

Recent acts include mostly local artists, but house booking agent Max Holmquist is open to various types of music, from country, to hip hop, to indie rock. Every Thursday they “transform into Mojo Jokehouse” and offer a comedy open mic night. On Tuesdays the stage is for singer/songwriters. Just like their beer list, the entertainment is diverse, and Nebraska-based whenever possible.

McMeen believes there are “tons of good breweries in Nebraska that don’t get the spotlight,” but at Mojo, they’re the focus. Eleven local drafts encircle the bar, including choices from Lincoln’s Empyrean and Modern Monk’s breweries.

On a recent lunch hour visit, the patio was occupied by lucky folks spending their Friday afternoon imbibing. The “please seat yourself” sign added to the laid back vibe, but the service was still efficient and friendly. I was eager to see whether the grub matched the caliber of the entertainment and the drinks.

The Beef Bruschetta Pizza ($8) had tomatoes, onions, basil and garlic, along with parmesan and provolone cheeses. The term “pizza” is used loosely here. Though the thick layer of cheese smothered the chopped brisket, the smoked marinara provided the boldness to set this dish apart from your average flatbread. It was indulgent, but a fitting portion for lunch.

At dinner, I tried the Mojo Nachos ($9). The chips were light and crispy, and the smoked chicken was juicy and tender, albeit with a very pronounced smoke flavor.

The Mojo XL Sliders (choice of three for $9) are fun bar food. As I dug into the Mojo SloJoe, I suddenly realized I was wearing white. Fortunately for me, the sandwich was a drier, tamer version of the Sloppy Joe, and I found it needed a touch of the smoked red pepper catsup, served on the side.  The pulled pork on the Mavwich wasn’t quite melt-in-your-mouth tender, and like the chicken, the smoke was rather powerful. Still, I found the texture and taste to be somewhat exciting. The mild Crabby Patty focused more on the crunch of the onion and pepper than the crab, but I welcomed the subdued flavor next to the robust meats. Each slider had a single pickle, on soft Rotella buns. With the many slider choices – seven types, along with an array of sauces like Caribbean aioli – they are a highlight of the menu.

This is not a carnivores-only club. They make a veggie burger in-house, and salads – including one topped with fresh, house-smoked salmon – round out the menu. I can’t really pin down a specific regional barbecue style here, but who needs labels?

Mojo is a place for guests to support the local beer scene, laugh at a few jokes (though there is no guarantee the comics will be hilarious), see live music, and get down on a plate of nachos. It will be interesting to see how they develop in the coming years, but for now, this smokehouse should be a welcome addition to Omaha’s music, comedy and barbecue communities.