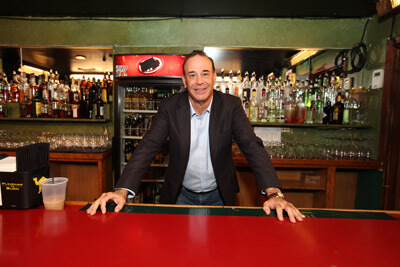 Through my own experience in the industry, I have seen a lot.  I am never shocked to see the condition of bars and restaurants on reality TV. Truthfully, because there are a lot of bad restaurants and bars. So I was happy to catch a new show called “Bar Rescue” on Spike TV. From my bar and restaurant experience and after viewing all of the episodes to date, “Bar Rescue” and host Jon Taffer are the real deal. In fact, Spike TV will pick up a second season of this original series. Last week I spoke with Jon Taffer about the show, the business and future of “Bar Rescue.”

Q. Jon, out of every 10 restaurants or bars in the industry how many are really like the ones participating in the show?

That is a great question and nobody else has really asked that question; so, my compliments. It’s different in that I am not cheap, somebody of my experience and caliber, my time is not cheap. So the unique difference is that these operations typically could never afford me, candidly. They are afforded an opportunity of not only my time and work, but also in the work we do to the interior, and it is almost like a gift from the heavens. That is the difference, because the clients are typically a little more desperate than in the real world, because with “Bar Rescue” they are totally broke in most cases. Whereas the clients that typically hire me are close to broke, but at least they have enough money to get me there.

Q. What we see on the show is Jon Taffer the intense professional. What do you like to do when you need a break?

I have to tell you I am sitting in my office and to my left is an electronic drum set – studio quality – a marshal mini stack and next to that two guitars, so I love music. Sometimes in the middle of my day I get behind my drum set, I put on my headphones, play some drums or a little guitar to take a break and then just sit back down to my desk. Music is a huge part of my life.

I also love comedies, and to pick one of my favorites of all time, I love the Big Lebowski. I am a huge fan of the Dude. Coming up in Hollywood as a musician I saw a lot of people who were like the Dude.

Q. Jon you rely on your wife Nicole for recon and input on numerous episodes. Which episodes do you think she enjoyed the most or the least?

That question couldn’t be more timely, because episode nine happens to be that one. In all the years Nicole has done this for me, she has never been touched by somebody when she didn’t want to be. She has never had anyone physically get her upset and have her walk out of the bar upset, and that happens in the episode. It is a memorable episode but not in a good way. I never have put my wife in a situation where people before have touched her, and you will see that in the episode. It is pretty darn intense.

Q. Have you ever had a client just flat out say, no?

Actually, episode ten, which is the last episode we air.  I do not want to tell you too much and ruin it for you, but I got up and walked out. The production crew was freaking out and the owners of the place eventually changed their minds.

I do not hear that too often.  Maybe a couple of times someone did not agree with the strategy or direction I was going and I have stepped aside. But I have resigned from clients five or six times over the years. I do not like getting involved in something that’s going to fail.  As a consultant, I am only as good as my last one.

Q. Talking about the cameras before the recon, how much notice does the staff have that you are coming into the bar?

What happens is our crew arrives and we are on location for about six days. So the cameras arrive about 24 hours before myself or the recon crew. They are following employees around, customers that walk in, so they are not really sure who we are, but by the time we arrive there has probably been 100 people the camera has followed. It is important that the employees get comfortable around the cameras before we get there. and surprisingly they do, believe it or not. I was surprised, because this was my first season, and as an executive producer of the show, I get an opportunity to be involved in all aspects of it.

Check out the interview in its entirety here at DishOmaha.com