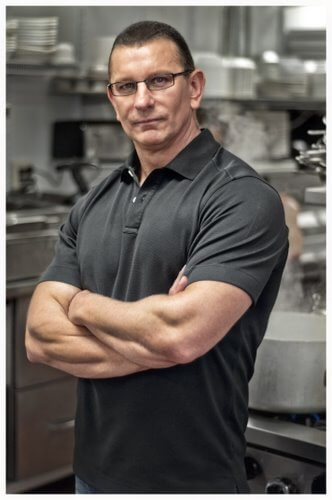 Television networks still have a long way to go when it comes to developing great food programming in my mind, but I applaud them with a light 2-finger golf clap. If your favorite food shows include phrases like “y’all” or “E.V.O.O.” then don’t bother reading the rest of this article.

It is easy to be passionate about food in a perfectly decorated, Alice in Wonderland test kitchen, nestled in a spacious sound stage, with little culinary elves gathering your ingredients for every show. However, one chef in particular has dared to be original and his winning recipe is taking on the impossible.

Whether it is impossible dinners or impossible restaurants, Chef Robert Irvine and his team are telling real stories through hard work, discipline, and tough love to failing restaurants across the country. If there is any hope for future television shows featuring the dynamic restaurant industry, you need to take notes from Robert Irvine of Restaurant: Impossible.

The Reader: How did your relationship start at the Food Network, how did they find you?

Irvine: They didn’t find me. I created Dinner: Impossible with a guy named Bryan O’Reilly and I shot the pilot as a 30 minute show and we sold it. So they did not find me, I took them the show, as I did Restaurant: Impossible.

People don’t realize, and some people compare it with Kitchen Nightmares, but it is completely different. Gordon goes in there and says the food is whatever it is, and then he leaves and he doesn’t do the work, a team comes in, has a week and has an unlimited budget. I go in there and I do the work, 2 days and the budget, we only have the $10,000 no matter what it looks like.

These are real people with real problems and some through no fault of their own, others are poor management but not everyone has control of that situation. Some have gone through life changing situations that have affected their restaurants. A number of the stories are very sad and I am sympathetic in certain parts, but I am going to get things done.

When you dine out, do you find yourself scouring the restaurant for faults, or are you able to relax and actually enjoy your meal?

I am always looking from the minute I walk into the door, through the meal and up to paying the check. I have been that way before television, it’s just what we do as industry people. Since you are in the industry and you have lived it, it is tough.

What inspired you to work with failing restaurant owners?  Did anyone help you out early on?

No, I always worked in institutions, I never had a restaurant of my own before, but I have opened over 30 hotels, restaurants and casinos. I understand what it takes to keep them running and I know what it takes to run a business inside of the business. Whether it is, 14 or 15 restaurants in a casino they all are independent and they still have to make money.

There are so many restaurants failing in this economy I thought it was a natural fit. Just so you know, I actually had this idea about 5 years ago and no one would touch it. The insurances to go in there and start knocking holes in walls and changing people’s lives were too much for executives.

In the world of “Rock Star Chefs”, where do you see yourself?

Oh geez, well I am at the bottom of the heap. I don’t consider myself a rock star chef, I really don’t. I cook for a living and I try to help out as many people as I can in my life and that’s all I care about. I don’t care about the fame of television, I use to a lot. When you first get into television it is a big deal, then you realize you are no better than anyone else, we just have a platform to use, to help other people. I use that platform for the work I do in the military, the work I do with cancer because I was fortunate enough to get that platform. I do not consider myself the best chef in the world but I am good at what I do.

One of the benefactors of stimulus programs over the past few years were culinary schools.  Some of those students were made to believe they would have a promising career, some saw the magic of television chefs and some were just plain foolish. What is your take on culinary schools and the role that they have in today’s economy?

Well I think they jumped on the band wagon of the celebrity chef. But I never went to those schools, my training was in the military, my family was not wealthy and being from England we are not known for its food that’s for sure. I think the schools have a large impact of our business because there are not enough skilled people out there. Can you learn without going to school?  Absolutely, I did and there are thousands of people that do that every day. I could not afford $40,000 but for those who can afford it, it’s a great way to get a basic knowledge.

You know this as a chef, when you get out of there that is when the real work starts. You know your knife cuts and sauces and how to cook things but for an industry that changes so dramatically, you learn every day. It is all about attitude, and a positive attitude, if you are willing to work and put that time in, you can do it.

Wages of FOH workers, how long can a business, the economy, and the workforce maintain such low wages?

You know if you want good people you have to pay good people. You know there is an old saying, if you want monkeys, pay peanuts. Well good chefs and good establishments pay good people, not at first, but the average pay scale for a cook nowadays is $14-$17 an hour. Is it like a plumber, is the person as skilled as a plumber? Absolutely. But as far as do I see the pay scale going up no, no I don’t. A good server can make $300 to $400 a night if your good. Now not everyone can do that, especially in chain restaurants, but the tips have definitely dropped in this economy and they are not tipping as much as they use to.

How do you like your eggs cooked, take your coffee and what is your favorite dessert?

Over medium, always.  I have a quad grand latte, four sugars at 200 degrees. My coffee is really important, when I do a show I drink between six and eight coffees in the two days, which is a lot for me, but with four shots per cup it’s pretty good. As far as dessert every dessert is my favorite dessert, I love dessert, I believe that every meal including breakfast should have something sweet.

What is next for Chef Robert Irvine?

We got another 26 episodes that we are working on right now and I believe another order after that. I just take things day by day. I have a new restaurant opening next week so that will make two restaurants for me. I just had an opportunity to act on an episode on ABC’s Body of Proof, and if something else comes along than great, if not I won’t cry about it.

Ultimately, just like you, you find a passion for what you do and my biggest high is when I give these restaurants back to the people. If something comes along that I would like to do it, I will and if I don’t, I won’t.

After combating countless “impossible dinners,” Chef Robert Irvine faces a daunting new challenge: save America’s most desperate restaurants from impending failure in just two days with only $10,000. In his new prime-time Food Network series, Restaurant: Impossible, Robert uses creativity and resourcefulness along with a lot of muscle in his fight to rescue these restaurants and give hope to the owners and their employees.