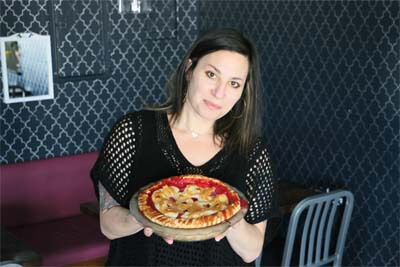 Every time I drive by Isa Moscowitz’s restaurant on Saddle Creek, David Bowie’s “Modern Love” immediately starts playing in my head. Being a huge Bowie fan meant the name always stood out to me, and I imagined the song had to be the namesake of the small vegan place that has been on the lips of all my vegan and vegetarian friends.

As it turns out, the tune was not the inspiration for the name of Omaha’s only “swanky vegan comfort food” restaurant.

When I asked Moscowitz how she conjured up the name she said it was actually inspired by the Yeah Yeah Yeahs’ song “Modern Romance”. While driving to check out a possible location for her new venture, she was trying to think of what to name it. The track came on and she thought it would make a great name for a restaurant.

She tells me that when she brought it up to people, they thought “Modern Romance” was a bit much, and she should probably tone it down. Eventually, everyone agreed on Modern Love.

“The more it marinated, the more it made sense to me. It was classic food with a modern twist, made with love.”

With that explanation, the name couldn’t be more fitting. From the incredibly popular “Mac and ‘Shews” to delectable desserts like Blackberry Bourbon Pie, the food at Modern Love will remind you of the food you loved as a child, while at the same time making you question why you ever hated beets.

Sitting at Beansmith Coffee Roasters on Harney waiting to meet up with Moscowitz, I realized that I really knew very little about vegan food. Sure, I’d tried some things before. A friend of mine was always experimenting with cashew cream and seitan, but up until about a year ago, I was still pronouncing it “satan”. Thanks to people like my friend, and Isa Moscowitz, I am now much more willing to try new foods. Foods that don’t include beef, chicken or pork.

The questions that came to mind as I prepared for our meeting revolved around who this Brooklynite revolutionizing Omaha’s vegan scene was, and why was she here?

I recognized the author of every vegan’s sacred textbooks as soon as she came through the door. She wore a faded black t-shirt and her signature black framed glasses. It was like the photo from her cookbook cover had come alive and was now striding toward me.

Sitting across from me at a small white table by the counter, she answered my questions quickly, gesturing for emphasis with chipped, sea-foam green tipped fingernails as she spoke.

Moscowitz said she moved to Omaha after living in Portland for two years because her boyfriend at the time was from Omaha. The boyfriend may not be around anymore, but luckily for Omahans, Mocowitz is. She said she loves Omaha, especially now that she has the restaurant. It would seem that love is not unrequited. Business has been great and she’s been happy with the responses she’s gotten.

“All of the variables were weird,” she said, pointing out that it’s not a big, fancy place and the location might seem a little strange to some, sitting across the parking lot from sandy volleyball courts. She knew she needed something small “just to test the waters.” If things went well, bigger could come later.

“It’s weird, because I think like a New Yorker, and I need to think like an Omahan,” she said. “It’s not really about location. People will come to you if you have a good restaurant.”

Moscowitz adds that she thinks it is difficult to find a location here. Omaha is known for its abundance of restaurants, and she said it seems like as soon as one restaurant closes, someone is already waiting to take over the space. Sometimes before the doors are even closed.

“It’s just finding the right thing at the right time. I know it will come.”

Knowing Nebraskans’ penchant for meat in all forms, the idea of opening a vegan restaurant here might seem like a foolish act to those unaware of the growing vegetarian/vegan market here in Omaha. For Moscowitz, though, the gamble paid off.

Reservations are highly recommended, as she says they often have to turn people away. And she “hates the feeling” of turning people away.

*Recent confirmation of the opening of Modern Love in Moscowitz’s hometown of Brooklyn, NY might cause panic among the vegan community here in Omaha. But don’t fret, Vomahans. Moscowitz plans to split her time between the East Coast’s newest go-to hipster destination and the locus of the Midwest’s indie music scene.