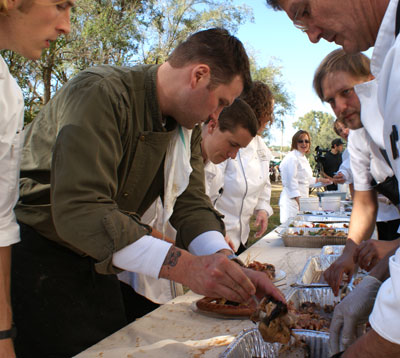 Maybe the last thing chef Matthew Taylor expected a year ago was to be living in Nebraska City and working as the executive chef at the Lied Lodge and Conference Center. He was a co-owner of Rivers, an Italian restaurant in Grand Rapids, Minn., which was doing well. Then he got a recruiting call from the conference center and on a whim took a personality survey. “It took two hours to take it,” says Taylor, “and because I wasn’t looking for a job I was completely honest. I thought, if these people call me back after this, I will be amazed. They did and paid for a plane ticket to come down. I came and toured the place and I absolutely fell in love with the mission.” The Lied Lodge and Conference Center is managed by the Arbor Day Foundation, which is a nonprofit member-based organization devoted to planting trees. The foundation has educational programs around the world seeking to inspire people to replant forests and to promote conservation. The conference center has won awards for its green efforts, and its restaurants are a part of the picture. The restaurant has access to the foundation’s many orchards, chief among them the apple orchards but also including hazelnut groves and vineyards. Chef Taylor planned out an extensive garden for this year at the Kimmel Orchard. “During the (summer) season, I rarely order anything outside the garden,” says Taylor. “We plan in the spring what we’re going to grow. In the summer, I’m waking up early in the morning and I’m getting straight-off-the-vine food.” Taylor manages several outlets at the conference center, including a lounge, restaurant and special-event venues. Plus the kitchen puts out up to 4,000 homemade apple pies every year, all with apples from Nebraska City. Taylor is able to source many of the restaurant’s food from local growers and farmers. “The mission of the foundation is to inspire people and celebrate trees,” says Taylor. “The connection of what we do in the kitchen sometimes gets lost. My hope is that I’m creating a memory with somebody through food, that they’ll say, ‘Oh my gosh, they plant trees. Is that why they care so much where their food comes from?’” Taylor listed off a couple of the farmers he works with, Perfect 10 Ranch and TD Niche among them. He’s currently going a little crazy over the new pulled pork sandwich with pork from TD Niche. “People forget what real, real pig tastes like. It’s simple. When you bite into the sandwich you feel your salivary glands just go,” he says. Taylor learned this commitment to integrity at various restaurants that he worked at across the country. The chef has no formal training but showed up on kitchen doorsteps with his knives and worked for free until they gave him a job. One such place was Perugia, an old-world style restaurant in Missoula, Mont. Of the restaurant, Taylor says, “That was the first time someone talked to me about respect in the kitchen. Respecting the food, respecting the customer. Taking the food from the grower, responsibility to the ingredient to treat it with respect and then to respect what you give to the customer.” Taylor went on to spend time at Cyrus, a Michelin two-star restaurant in Sonoma, Calif., and eventually his own Italian restaurant in Minnesota before making his way to Nebraska, a state he had been to before the Arbor Day Foundation called him. “Very rarely as chefs do we get to truly make a difference to the world,” says Taylor. “I’m not working for a company who is trying to make a profit. I’m working for a company that everything we do is plant trees and inspire people.” For more information on the Lied Conference Center and the Arbor Day Foundation, visit liedlodge.com or arborday.org. Call 402.873.8740 for reservations at the conference center restaurant.