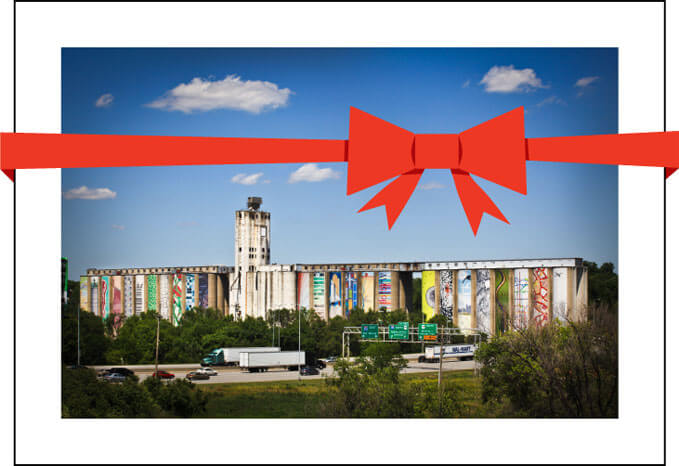 A couple of openings to mention; The Corner Crepiere on the corner of 24th and Chicago is aiming to open the first week in December. Their hours will be from 7 a.m. to 7 p.m. They will offer savory and dessert crepes along with a coffee bar. Also, Tommy Colina’s Kitchen is opening their west location the first week in December as well. They will launch a new happy hour menu at the new location. You can follow their progress at www.facebook.com/tommycolinaskitchen.

The Emerging Terrain Store is now open at www.emergingterrain.org/store

Give unique gifts this holiday season. You can get prints of your favorite Stored Potential banners or a photo of the art-covered grain elevator. Pick up a tote bag made from an art banner or a set of postcards showing Emerging Terrain’s community projects. Or give yourself a gift. It all supports Emerging Terrain’s ongoing work.

Old Chicago, known for its selection of 110 beers from around the world, celebrates the winter season with The Winter Mini Tour featuring 10 seasonal beers beginning on November 28. Old Chicago beer enthusiasts may enjoy the Winter Mini Tour through December 31, making it the restaurant’s longest celebration of the year. The tour begins with a kickoff party on the evening of November 28 at all five locations in the Omaha area: 1111 Harney Street; 13110 Birch Drive; 425 North 78th Street; 2643 South 144th; and 7506 Olson Drive in Papillion. All five of the Old Chicago restaurants will feature the following eight brews along with two selections chosen locally by the restaurants:

·       Old Chicago Black Diamond Porter – a unique style only available at Old Chicago, this beer was designed and created by Old Chicago and brewed at Boulder Beer Company.

·       Stella Artois – initially launched as a seasonal beer especially for the Christmas holiday in 1926.

·       Widmer Brrr – a red ale with a malty sweet finish from Widmer Brothers in Portland.