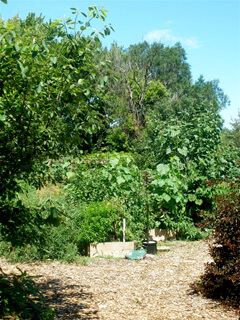 Just as I sat down with Jeanine Dickes, director of the City Sprouts community garden, her rooster crowed, signaling the beginning of my interview with the passionate individuals behind the project.

The garden, situated in the Orchard Hill neighborhood, nourishes and educates hundreds of North Omaha residents from different ethnic groups and backgrounds. For refugees and the poor, the path to healthy living begins with nutrition. One of the biggest issues is the neighborhood’s proximity to one of the largest food deserts in the Midwest. Dickes, a tall redhead with sparkling, friendly eyes, sighed as she looked out the large window. “We are right in the middle of it.”

City Sprouts is a community garden with wisdom that comes with age. “We were the first inner-city garden in Omaha,” said Dickes, motioning to a volunteer to take some of the dried peppers hanging in the kitchen. “For 16 years we have provided food for hundreds of people in the neighborhood.”

The importance of City Sprouts soon spread throughout Omaha, and Lauritzen Gardens soon offered space for an important fundraising event for the garden: an annual gala.

“Lauritzen has been incredible, and are one of our biggest sponsors,” said Norita Matt, an Omaha city planner with a contagious smile. “They gave us the space nine years ago, and they have hosted the gala ever since.” Not only has Lauritzen offered space, it helps sustain the crops from the City Sprouts garden year round.

“They allow us to use their greenhouse during the winter,” said Dickes. “They provide us with everything except the seeds.”

The title of this year’s gala is “Cultivating Urban Food Systems,” and this is the year City Sprouts hopes to raise $100,000 that will be used to help keep the garden functioning. “In each successive year, City Sprouts has been growing, in terms of donorship and volunteers,” said Dickes.

The gala costs around $7,000 for catering, setup, and expenses relating to the event. With the true spirit of Omaha nonprofits and other donations, support from organizations such as the Mammal Foundation and grants from the Sunshine Lady Foundation and the City of Omaha Mayor’s office have kept the garden growing. “The City of Omaha planning is supportive of City Sprouts and the Orchard Hill neighborhood,” said Matt. “It’s in our goals to enhance the neighborhood.”

There are 80 confirmed tickets for the August 21st event, but phones were ringing constantly, cheerful tunes in the background, letting us know that people understand the pertinence of such an organization. Individual tickets are $25 and tables are $200. “The funds from the gala will go to gardening and community activities,” said Matt. There will be a cash bar and a silent auction, with items donated from local organizations and volunteers around the city.

Volunteers are the heart of the operation, and during our interview several peeked into the living room to say “Hi” and inquire about composting and worm digging, a new project the garden is utilizing to create rich soil.

“We function on a shoestring budget along with the generosity of the volunteers and the community,” said Dickes. “We literally live off of dirt, water and air.”

Dickes took me through the garden and small farm, giving me a chance to see what they provide to hundreds of needy people. Peach trees dripping with fruit bowed towards the ground, a gorgeous juxtaposition with the carpet of zucchini, yellow squash and flashes of cherry tomatoes. Volunteers from around the neighborhood, including group homes and church groups, tend to 50 beds. Dickes stops to sample some New Zealand spinach.

“We don’t turn anyone away from the food in the garden,” she said. “For $20, residents in the neighborhood get whatever is grown until the freeze. For $30, people from outside the neighborhood can enjoy the produce. But some refugees and other people can’t afford to pay. We still try to feed everyone we can.”

Bitter melon and Nepalese peppers fill the garden with an exotic fragrance, and string beans the size of my laptop twist over the dirt. “I do research on what ethnic groups we have in the area,” said Dickes. “We are a vendor at Charles Drew, and the Burmese and Bhutanese come and give me seeds to plant. I’ve been shown how to plant food I have never seen before.”

As we returned to the house, my feet warm with dirt, residents were already coming to the house, offering their services for produce. Gardens like these keep neighborhoods healthy.