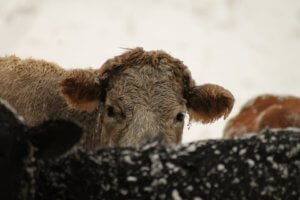 This winter was especially brutal for Nebraskans, but how does that disrupt our bustling and creative culinary scene? How does food go from the frozen farm to our tables? Prestigious Omaha food providers known for their commitment to sourcing locally offered some answers.

With our already-short growing season, Nebraska chefs are accustomed to getting innovative in their farm-to-table efforts. Rather than letting the cold get her down, MJER Help chef Shelley Elson-Roza chooses to get inspired by what’s available. She sources flour, beans, and lentils locally through Lincoln’s Lone Tree Foods and FarmTable Delivery, based in Harlan, Iowa. She also focuses on using 100 percent of the vegetable; for example, local carrots were available most of the winter, so carrot-top pesto became a customer favorite. She also combines local with produce from other areas when possible, like local hydroponic Bibb lettuce paired with greens from warmer growing regions. This chef and caterer has been enjoying the sweet potatoes and squash that are available locally and using them to embrace the season with warm stews and soups.

Chef Kane Adkisson of the renowned kanō pop-up series has a few tried-and-true methods to keep it fresh in the winter. He grows his own micro greens and edible flowers to use as garnishes. Plus, Plum Creek Farms in Burchard, Nebraska, can provide chickens year-round. Local pork from TD Niche (Elk Creek, Nebraska) and Jon’s Naturals Co-Op (McClelland, Iowa), as well as lamb from Liberty Farms (Glenwood, Iowa), round out great winter options. And Nebraska’s love affair with beef necessitates sourcing from Morgan Ranch (Burwell, Nebraska) or Imperial Farms (Omaha-based, cattle in Nebraska and Iowa).

Adkisson also gets busy preparing for winter by focusing on preservation methods in the abundant summer and fall seasons. Approaches like fermentation, pickling, salting, and dehydrating then rehydrating are part of his culinary arsenal. Adkisson likes the challenge and says it makes him get more creative due to the constraints of a Nebraska growing season. He also thinks it makes the Omaha culinary scene unique.

Owner Robbie Malm of NoDo’s Hook & Lime Mexican-inspired eatery survives the cold with farm-fresh eggs from Iowa’s Farmer’s Hen House. South Omaha’s family owned tortilleria and grocery store Jacobo’s provides the chips for the restaurant, while Upstream Farms of Albion, Nebraska, brings the beef. The bread for Hook & Lime’s tortas (sandwiches) is also locally made at Omaha’s La Esmerelda. Jon’s Naturals Co-Op is another favorite of Malm’s all year long, but he specifically mentioned the beef shank from South Dakota farmers as a winter knock out.

Le Bouillon and Via Farina’s chef and proprietor, Paul Kulik, mentioned some great year-round options for Nebraska eateries. He shared that mushrooms are on the rise in this area with about a half dozen cultivators providing them almost all year. Kulik is another fan of chicken from Plum Creek Farms and farm-fresh eggs during the winter; his are sourced from a variety of places because of egg production declines in the colder months.

Truebridge Farms pork provides more all-season favorites. Certified Angus beef is sourced from all-natural Western Iowa producers while Lincoln’s Shadowbrook Farms supplies cheese. Looking ahead, Kulik discussed some of his goals, like focusing on Northern European veggies that can grow, albeit slowly, in a winter climate. Things like chicory, endive, and white asparagus spring to mind. He also targeted sunchokes, aka Jerusalem artichokes; this indigenous root needs a cold climate for an optimum nutty and sweet flavor.

Kulik said that often per-pound local produce is more expensive than the protein on the plate. This demands that chefs get super resourceful and creative with a focus on 100 percent usability of the vegetable. The chef also brought up a must-mention point: that with the increasing number of restaurants with house preservation techniques, the Douglas County Health Department has a tough time ensuring that every establishment follows proper safety methods. As consumers, that is always something to keep in mind.

Chef Ben Maides of Au Courant fame changes his menu every week at his Thursday night planning meeting. All year long, he lets his local producers inspire his seasonal dishes. Maides also adds another element to his sourcing, not only focusing on good quality but also on good causes. He loves to work with Scott Yahnke from the Omaha Home for Boys farm in North O and pivots his dishes based on what is available from that nonprofit. Recently, divine baby leeks from their hothouses have been featured. Another purveyor with a greater purpose is Emerald Acres in Lincoln. This farm trains adults with disabilities to work the land and in the greenhouse for a fair wage. Maides has been working with EA’s Sandy Roush for some time, and her hydroponic lettuce was indispensable this winter. Additionally, Emerald Acres provides farm fresh eggs for Au Courant all year.

Maides sources lots of protein from the region as well, with duck from ABC Farms in Caledonia, Minnesota, Piedmontese beef from Jon’s Naturals, chickens from Plum Creek, pork from Truebridge Farms, lamb from Dakota Harvest, and his favorite, trout from Blue Valley Aquaculture in Sutton, Nebraska. The Blue Valley team has started a pheasant farm, so it provides that bird for Au Courant, too. Maides said his relationships with these producers inspire him to dig deep and get creative so he can use what they have available. He also preserves when it makes sense and quality can be preserved; an example of this would be when he dehydrated mushroom stems, then added them to pasta dough or pickled daikon radishes and rare golden raspberries for later use.

We also connected with the director of operations for Meadowlark Management, Matt Carper. Meadowlark is responsible for the Blackstone’s Stirnella and Butterfish restaurants. He’s enjoyed potatoes and squash almost this whole year via Iowa’s FarmTable Delivery. Flavor Country Farms in Honey Creek supplies mushrooms, microgreens, and herbs using its greenhouse all year. Eggs are sourced from Little Addie’s Eggs and Cottonwood Hill Farms, while Bee Grateful Gardens brings the honey. This longer winter has made his chef and partner, Matt Moser, antsy to start planning his spring menu, but he looks forward to what local producers will have available in the coming weeks.

Midwestern grit seems to triumph over a short growing season and the latest remarkably harsh winter. Chefs have different approaches for winter farm-to-table, but it pays to get creative and be prepared. We are blessed to have some stellar options for dining in Omaha, as well as valuable farming partners throughout the area.