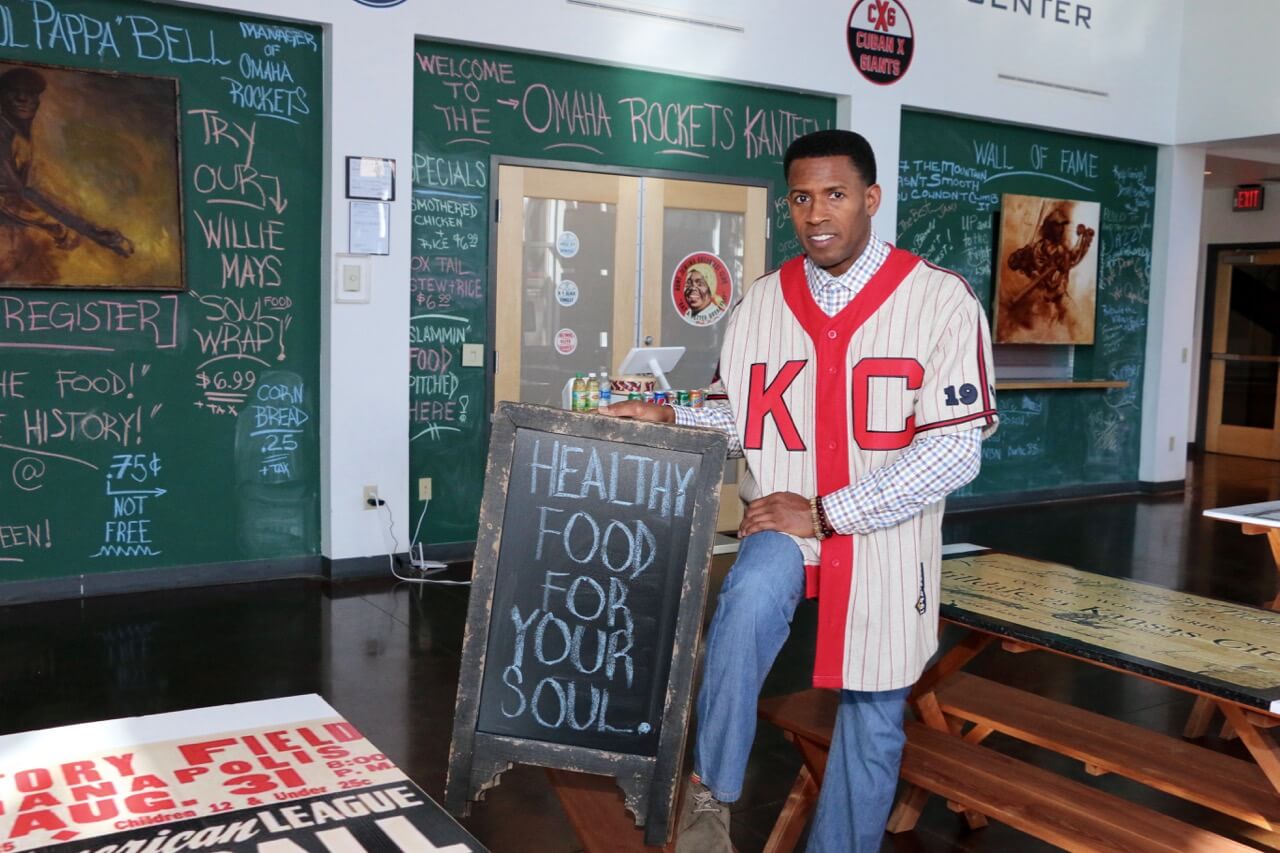 Omaha Rockets Kanteen in the Lake Point Center at 24th and Lake is a “healthy” soul food eatery with a Negro Leagues Baseball theme and a community empowerment thrust.

The joint, whose tagline is “Enjoy the food, digest the history,” is named after a barnstorming semi-pro, independent all-black town team, the Omaha Rockets. The club fed players to the Negro American League and played exhibitions against clubs like the Kansas City Monarchs.

Since opening in July, Kanteen’s been championed by city officials and community leaders as a catalyst for more development in this historical African-American business corridor that’s seen better days. Plans call for the area to recapture its arts-entertainment and small business district past.

Curry’s been through the revival thing. His now defunct Negro League Cafe was heralded as a spark for the Brownsville section of Chicago. That restaurant enjoyed a five-year run before he reached an impasse with his landlord and couldn’t find an affordable new space to lease. He took that brick and mortar on wheels with his Southern Pitch food truck. Two fruitful years came to a halt when city officials cracked down on illegal operators and enacted strict rules that stifled legit operations like his own.

The entrepreneur. who did part of his growing up in North Omaha, was twice ready to try his soul food-baseball concept here but each time could not drum up enough support. Finally, he and co-owner Marcus Johnson, an Omaha firefighter and fellow entrepreneur, got it done.

Curry’s justifiably proud of the concept behind his place.

He said even legendary Omaha restaurateur Willy Thiesen has praised his “niche” idea.

Curry harbored his Negro Leagues-themed restaurant fancy several years before launching it in 2004. His interest in the Negro Leagues started while attending Virginia State University. It went to a new level in Chicago, where he worked in the financial industry. During a Negro Leagues tribute night at Comiskey Park he marveled at the rainbow spectrum of fans queuing up for autographs from ex-players.

“If these people are willing to stand in this long line to get their autographs, I thought, why wouldn’t they patronize a restaurant with the same theme.”

Curry saw a moneymaking vehicle for celebrating a rich chapter of African-American history.

“After I got the vision, I had to make sure i was well-versed in the history. I immersed myself in reading and seeing anything I could. I mean, it was the look in their faces in the photographs. They didn’t bitch about nothing. They said, ‘If you’re not going to let us play this game with you, we’re going to learn the game, master it, and compete straight up.’ “

He said “the economics” struck him as well.

“The Negro Leagues World Series outsold the Major Leagues World Series, and we’re talking about nobody but black folks going to watch baseball. They would dress up to the nines. That alone compels me, especially after befriending a lot of Negro Leaguers and hearing their stories. They told me it beat the hell out of sharecropping. They’d be gone weeks on end but would come home with a pocketful of money and not be in debt.”

Teams often couldn’t find hotels or restaurants to serve them and so stayed at black boarding houses or private black homes where soul food was the going cuisine and pot liquor the savory brew. Kanteen pays homage to it all.

A chance encounter with Negro Leagues legend Buck O’Neil, who loved the idea for the eatery, emboldened Curry, but he was too busy climbing the corporate ladder to take the plunge.

Still, he said, “it kept gnawing at me.”

He said once he opened his Chi-Town cafe it took off as a stop” for ex-sports stars like the late “Mr, Cub,” Ernie Banks.

He’s banking his Omaha Kanteen becomes a destination, too.

“Baseball is a reflection of American society and I believe I have something that brings people together and embraces a piece of our culture people find wonderful. I look at it as being a true melting pot because some of everyone is coming in here.”

He will expand evening hours once he adds live jazz acts and liquor sales. He’s bullish on the area’s potential.

“There’s oil in North Omaha and I’m drilling for it. Why not be the first? It seems like speculation but I know it’s about to happen.”

He knows the area needs more of a critical mass of attractions to stimulate big commerce.

He wants his business – he’s already looking to expand in the metro and in Kansas City – to be a beacon of hope and a source of employment for more inner city residents.

“My mantra is to pick people up.”

Avenue Scholars youth will learn the culinary trade there as interns. He wants to give young people positive options that counteract the miseries he saw claim too many friends.

Look for his Southern Pitch food truck to hit the streets this fall.