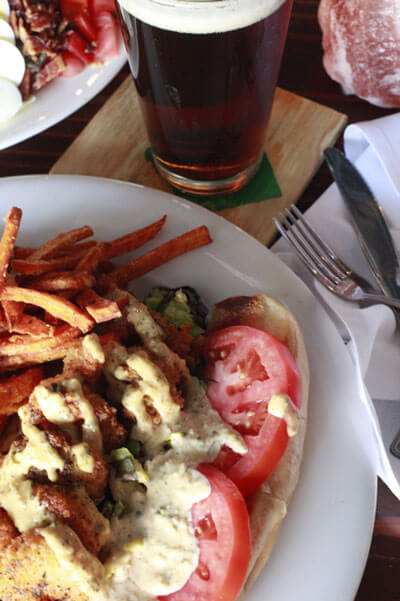 Walking into the Jackson Street Tavern, what guesses would you make about the establishment? It’s in the Old Market, and has an outdoor dining area decorated with beer signs. The word “tavern” is featured in the name. You’d probably guess it’s a bar emphasizing brews, burgers and chicken wings. You’d be wrong. Jackson Street Tavern does sell drinks, but it also features an ambitious food menu, with prices to match. My wife and I visited on a quiet Sunday night. We started with the Tuna Not-Chos appetizer ($12), featuring small tuna slices with wonton chips, avocado and mango salsa. The fish was well seasoned and the flavors worked well together, but there was only a tiny serving of salsa. Our server said this was a new dish, and she promised to pass along our suggestion for a larger cup. In a phone interview, chef and co-owner Deke Reichardt also recommended the Duck Tacos ($8) and Neptune Avocado ($15) appetizers. My wife ordered the Polynesian Pork entrée ($16), which our server said is another new dish. It offered two six-ounce pork chops seasoned with cilantro and dipped in hoisin sauce. It was served with rice, grilled pineapple and vegetables. The pork’s exterior was slightly chewy, but the center was succulent and juicy. I am not typically a fan of cilantro, but it was surprisingly good in this context, and the hoisin sauce was the perfect complement. I tried the Cadillac Cakes ($25), which Reichardt had also recommended. It was comprised of two lightly breaded and moist crab and lobster cakes, served with rice and grilled vegetables. This dish is sometimes overwhelmed by breading, but the seafood was the star here. The rest of the menu is far-reaching. There are seven salads and 11 sandwiches, all in the $8-$10 range. Three steaks are offered, along with traditional pork and lamb chops (all around $30). The entrée list includes several seafood and chicken dishes, along with a few choices that are relatively rare in this area. Cioppino seafood stew ($23) is available, and Thai Duck ($22) features roast duck in a sweet and spicy Thai mango-chili glaze. There are also four pasta dishes and even a kid’s menu. Jackson Street Tavern is open for breakfasts on the weekends, offering a number of egg dishes and traditional breakfast options. Reichardt and business partner Roger Broderson opened Jackson Street Tavern last fall in the former Sam & Louie’s space. This is Reichardt’s first time as owner, but he has worked in the restaurant business for 30 years. The new restaurateur wanted a name that reflected both its location and the feeling he hoped to achieve. “I knew I wanted the words ‘Jackson Street’ in the name,” Reichardt said. “I was thinking about Tavern on the Green (in New York) and Tavern on Rush (in Chicago). In restaurants like those, the ‘tavern’ part of the name describes the feel of the place.” Reichardt is attempting a combination of menu and setting that is fairly unusual in Omaha. Before the tip, we paid $66 for one appetizer, two entrees and two beers. At that price level, you typically expect to be eating in a “white tablecloth” environment, with a certain level of décor and service. At Jackson Street Tavern, the atmosphere is more similar to a friendly bar. Tables are simple and unadorned, the service is casual, and a college baseball game was showing on television monitors. That juxtaposition was a little jarring for us, but you’ll have to decide if it works for you. A restaurant should be judged first and last on its food, and the eating here is quite good. It can be difficult to offer such a broad menu, but everything we tasted was well prepared and attractively plated. It’s also possible to spend much less here. Reichardt said lunch specials are offered for $7, and you could also split an entrée or stick with drinks and appetizers. There is a long wine list, and several local and national beers are offered on tap. The Jackson Street Tavern is a welcome addition to the Old Market dining scene. The menu challenges our expectations for a tavern, and there’s nothing wrong with that. Jackson Street Tavern is located at 1125 Jackson St. Hours are Tues.-Fri. 11 a.m.-2 a.m., Saturday 9 a.m.-2 a.m. and Sunday 10 a.m.-2 a.m. Call 402.991.5637 or visit jacksonstreettavern.com for more information.