Hearts ache while remembering the loss of Omaha’s dearest Tapas restaurant, Little Espana in Rockbrook. The closure, however, allowed for a new concept by the same owners, chef Carlos Mendez and his family. Welcome to The Hunger Block at 11036 Elm Street.

Mendez closed Little Espana in April 2018 after working 15 years in the Tapas industry and becoming burnt out from the challenge of midwestern expectations of large-portion sizes. Little Espana became a place for celebrating birthdays and anniversaries, but Mendez wanted to own a restaurant where the community could afford to dine any day of the week.

Mendez met his current business partner, Rognny Diaz, after both moved to Omaha from Caracas, Venezuela. Diaz shared his inspiration after visiting a place in Miami that served Venezuelan street food. Mendez loved the idea but wanted to expand from strictly Venezuelan food to a mix of different South American street foods from Colombia, Peru, Brazil, and Argentina.

“Back home, ‘La Calle El Hambre’ translates to ‘the hunger street or block.’ It is the best place to go to eat street food late at night or really any time of the day. Usually there are little carts that serve food. They open for lunch and stay open at night after the parties,” said Mendez. He found the best food vendors were the ones with slippery sidewalks from the sauce and food drippings left behind by people eating in the street.

While developing the concept of The Hunger Block, Mendez had the opportunity to test a few dishes out on the public at Dandelion Pop-up, a seasonal downtown event run by Nick Bartholomew to promote local chefs. Mendez was nervous about how the public would react to Latin food, as it is often confused with Mexican and Tex-Mex foods. He offered his version of a shredded beef Philly sandwich similar to the Pepito on his menu, and round cheese-filled empanadas drizzled in a variety of sauces. To his surprise, customers loved it all. Mendez remembers the biggest compliment that day was his colleague, Tim Maides, shouting, “I don’t know what I ate, but it was delicious!” Mendez knew he could trust Maides about good food and that his concept for The Hunger Block was on track.

Just a month after Little Espana closed, The Hunger Block opened in May 2018. The restaurant was painted, lighting updated, and more casual seating options were added, including an eight- to ten-person picnic table. They also prepared a party room that seats up to 20 people, and a patio for the warmer months. What gives the space an extra fun vibe is the mixture of Latin and American music. Mendez explained that it is common for a broader variety of the top of the charts to be played at South American restaurants and bars.

The drink menu lists an assortment of house cocktails such as flavored margaritas, mojitos, sangrias, and specialty cocktails including a Pisco Sour and a Smoky Rosemary Flower (an earthy mix of mezcal and hibiscus rosemary tea, garnished with a pink flower).

Along with a complimentary round of chips and salsa, appetizers include the familiar taquitos and nachos, and the less familiar tequenos, which are a Venezuelan version of gooey mozzarella sticks, wrapped in dough and served with house sauces. The freshest appetizer is the Peruvian Ceviche, a new menu item made of cilantro, pickled red onions, citrus marinated white fish, and two types of corn (canchas, similar to corn nuts, and choclo, a large kernel similar in texture to a garbanzo bean). 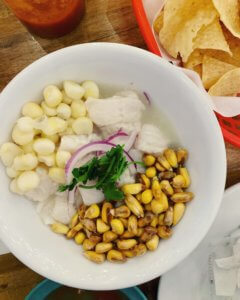 The rest of the menu is sectioned into salads, street food, and main courses. Mendez wanted to offer a few basic dishes for the less adventurous eaters, so he chose to serve build-your-own tacos and his take on a cheeseburger, which includes your choice of chicken, pork belly, or a beef patty topped with slaw, lettuce, onion, tomato, crushed potato chips, and a fried egg. It is monstrous. And to make it even larger, diners can double or triple their meat options. 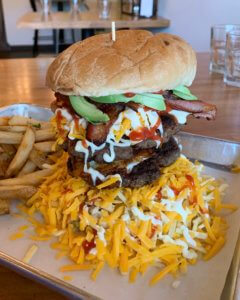 From the list of street foods, my favorite would be the Pepito, a sandwich with the choice of carne asada or shredded chicken, topped with slaw, crushed potato chips, cheese, ketchup and mayo. A similar version of this sandwich is the Patacon, which has the same toppings served open-faced on top of crispy fried plantains. Both dishes made me reminisce about my childhood, and drizzling on the additional house sauces elevated them into the ideal comfort food.

There are two main house sauces to request, along with a third secret sauce for those who crave spice. Guasacaca is a green sauce made of guacamole. The garlic sauce is a white sauce with the base of mayo, cilantro, and garlic. The off-menu hot sauce is spicy enough to come with a verbal heat warning. Each of these sauces was created to change the flavor profile of every bite. Mendez referred to this concept as “sauce then eat.” He said using a sauce to elevate a dish comes naturally in his culture, especially when eating arepas and experiencing the beauty of the crunch of the cornmeal with the flavor of the sauces. He has 15 other sauces he wants to add to the menu, one being a sweet corn sauce that specifically compliments the burger.

The best-selling main dishes would be the Bandeja Paisa, a rice and beans plate including seasoned ground beef, fried pork belly, a fried egg, avocado, plantains, and arepa, or the Parrilla Mixta, a grilled meat platter featuring a variety of meats and sauces, french fries, and fried arepas. Both are perfect for the adventurous eater who wishes to try a little bit of everything. 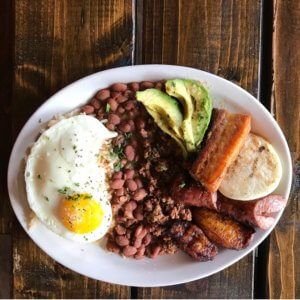 Milkshakes have been a huge part of Venezuelan culture and Mendez loves featuring milkshakes inspired by current events and holidays, such as Christmas, Husker football, and the World Cup. These towering milkshakes start with a base of chocolate or vanilla milkshake topped with a heap of Nutella, more ice cream, and a rotation of donuts, ice cream bars, and the envied Tres Leches Cake. Another secret, the Tres Leches Cake is made in-house, and when available, can be ordered on its own. Mendez said his favorite reason for offering milkshakes is he loves seeing everyone’s eyes pop. “Even a 60-year-old looks at the milkshake the same way a 4-year-old would.” 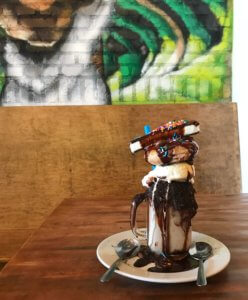 Along with the joy-filled milkshakes, Mendez is overwhelmed by the response Omaha has made to his restaurant. “A family of five were all eating arepas and I almost cried seeing it as this was the food that I ate as a kid.” He explained that arepas are made to be eaten any meal of the day. The dough is made simply, but the filling is what makes it special, and that is why the restaurant offers a variety of fillings for its arepas, including a vegan arepa stuffed with black beans, plantains, avocado and slaw.

Recently, The Hunger Block began offering takeout orders through Door Dash and will be part of Uber Eats soon. A weekend brunch menu will be coming in a few months, and it will feature build-your-own breakfast tacos and arepas. Catering is another recent option.

Mendez said he would not be surprised if there were additional locations of The Hunger Block in the future, or even more restaurant concepts opened by him as well. He has considered the possibility of Espana being part of the city again, too. “When creating concepts and seeing people react to it, believing in the dream that you had years ago or a month ago when you were at home scratching your head about the risk, the best payback that you get is when people see and understand the vision, and enjoy it.”