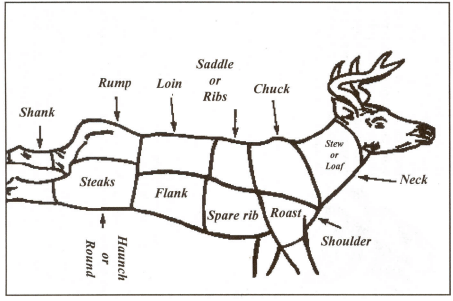 Venison, as deer is commonly referred to once it goes from pasture to plate, adorns the tables of two kinds of people – those who hunt and those who know someone who hunts. Sure it does end up on a restaurant menu from time to time, but it doesn’t reach most of the population, which is a shame because there is plenty venison to go around.

About four years ago the Nebraska Game and Parks Commission set out to connect the hunter and the non-hunter over a mutual love of this all natural low-fat, high protein and iron rich red meat. The result is the Deer Exchange Program, a website where hunters can search to find people who want venison and those who want it can search for hunters who are willing to share.

According to Kit Hams, Big Game Program Manger with the Nebraska Game and Parks Commission, the whitetail deer population has been growing most of the last 60 years. Hams estimates that Nebraska’s whitetail herd can produce as many as 150,000 fawns per year. A small and mange-weakened coyote population serves as their only natural predators in our area. Given that the coyotes aren’t much of a threat, human predators are necessary to keep the population in check.

To do that Nebraska Game and Parks Commission will likely issue about 130,000 deer permits. One person can have multiple permits. For example, a single hunter could register to kill or “harvest” as many female or antlerless deer he or she wants, but that hunter may only be able to eat two deer. That’s where the Nebraska Game and Parks Commission saw an opportunity and created the Deer Exchange Program.

“We were putting lots of deer permits in the hands of hunters and we were hearing from hunters that they couldn’t eat that much deer, but we needed the hunters to harvest that much deer, so we set up the website to enable hunters and people who want deer to get together,” explained Hams. “It’s nice to do things to help people. It’s a low cost way to provide some people deer meat, increase the harvest [of deer] and control the whitetail population.”

The last two years have marked the highest deer harvest on record – 88,000 were taken in 2010 and nearly 87,000 in 2011. To help put that in perspective 361 deer were harvested in 1945, only two of which were whitetail. Hams explained that disease and starvation would eventually limit the herd, but crop damage, natural and native plant communities and other wildlife would suffer.

“With no hunter harvest, [deer] herd health declines and human outrage would be severe,” said Hams. “The deer herd is a renewable resource that provides a tremendous amount of meat to people.”

Hunters and non-hunters can visit http://outdoornebraska.ne.gov/hunting/programs/deerexchange/ to register or simply search for potential donors and recipients. Although, the hunter cannot sell the deer the non-hunter who receives it will have to pay for processing. The cost of processing a deer varies depending upon where you take it, how much meat is processed and what you want. It’s fair to expect to pay anywhere from $85 to $175, which could include deer steaks, roast, deer jerky, deer sausage (cured and cooked) and ground deer. When ground, venison is often cut with pork or beef to add additional fat and diversify the flavor.

Even Michael Pollan agrees that a hunted meal is the most ethical and pure form of food. In most cases, it’s pretty healthy as well. According to nutritiondata.com, pan-broiled venison is considerably lower in calories and fat when compared to the same portion of 80 percent lean pan-broiled ground beef. Venison is also higher in protein, which makes it a healthy red meat option. Because venison is so lean, Hams recommends keeping a few cooking tips in mind. Trim the fat before you cook it. Do not over cook it. Enjoy venison medium to medium rare.

Nebraska Game and Parks receives letters and phone calls each year from people who were grateful to receive deer through the program.

“Sometimes it was someone who was out of work and this was inexpensive, healthy meat or a person in their family had medical issues so they couldn’t have the additives and antibiotics found in other meat – deer is healthy, all natural red meat. You can’t get more natural than deer,” said Hams.

Do you have thoughts on deer? Email the writer at miller.summer@gmail.com