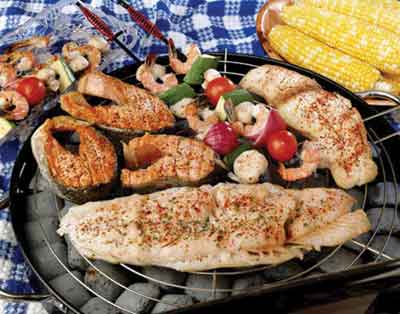 Now that it’s Memorial Day weekend and we can all bust out the white pants, it’s also the official start of the grilling season. Whether you’re using gas, charcoal or one of those hobo newspaper grills, it’s all good. Grilling is quick, easy, and a great excuse to sit outside with a nice cool drink of your choice. But if you think about it from a fuel perspective, grilling can be a very inefficient way of cooking, particularly if you’re using charcoal. There’s that period of waiting for the coals to come up to temperature, then the actual grilling itself, then the long cool down. If you’re like most, you’re only grilling a couple things — steaks/burger/fish/hot dogs and maybe a few ears of corn for a side — and that’s it. It’s a shame to let all that smoky goodness go to waste. Tom Colicchio of Top Chef fame (and a veteran restaurateur) wrote “Think Like a Chef” back in 2000. Re-released in 2007 to capitalize on his new gig hosting a cooking competition, the book encouraged readers to look at cooking the way chefs do. Instead of preparing a single dish, readers were encouraged to focus on a particular ingredient and prepare a lot of it. They’d roast a batch of tomatoes and employ them in multiple recipes, for example. That way they’d have a handful for a particular recipe, but they’d also have plenty to use in other dishes later in the week. Restaurants do it to save time and money. Why make cole slaw or crab dip from scratch every time someone orders it, when you can make a huge batch ahead of time? Having a deep bench of prepped ingredients can help you add a lot of flavor to your dishes in a short amount of time, allowing you to focus on the main ingredient rather than all the accoutrements. By thinking like a chef, you can use the grill to prep items you’ll use later in the week. Armed with a metric ton of aluminum foil, your favorite seasonings and some olive oil, you’ll be able to feast on grilled zucchini and squash, bell peppers and tomatoes and other vegetables all week. Just cut, season, drizzle with olive oil and set ’em on top of a section of foil. Roast some jalapenos and poblanos to make a fresh salsa. Cut the top off a head of garlic and wrap it in foil and you’ll have smoked, roasted garlic for sauces, salsas and other dishes. This theory can easily be applied to smoking, too. It’s entirely possible to smoke a chicken, turkey breast, brisket or even ribs on a traditional Weber kettle grill using an indirect cooking method. You simply create an area of greater heat on one side of the grill and place the protein you’re cooking opposite that, occasionally turning the meat and refreshing the coals and pre-soaked wood chips when necessary. An alternative method is to set an aluminum pan in the center filled with water or the liquid of your choice (apple juice and beer work well, too) and ring the coals around it, with the meat set directly above the pan. You can use that smoke and heat to cook other things. Even though you have a rack of ribs, or a few chicken breasts or a steak on the grill, there’s still plenty of open real estate. If you’re smoking, one of the best and easiest things to add to the grill is a Vidalia onion. Cut it in half horizontally, then trim the ends until these half-moons sit level. Drizzle a little olive oil on them, add salt and pepper, then place on aluminum foil, find a relatively cool spot for them on the grill and wait. These slow-smoked onions will add a tremendous amount of smoky goodness to a homemade barbecue sauce or atop burgers, not to mention an outstanding onion dip when combined with sour cream, mayo and bacon. If you won’t be smoking or don’t have the patience, a thinly-sliced onion, drizzled with olive oil and sprinkled with salt and pepper will offer similar, though not as smoky, results. Potatoes and sweet potatoes are also easy additions. Just drizzle with a little olive oil, wrap ‘em in foil and you’re good to go. You can even place them directly on the coals if you’re pressed for room. Just make sure you give the coals plenty of room to do their thing. Overcrowding will prolong your cooking time and could result in some unevenly cooked items. What would a cookout be without barbecue sauce? Fact is, few dressings are easier to make and more forgiving than barbecue sauce. Smoked onions and garlic, when added to a generous amount of ketchup and a handful of brown sugar, laced with a shot of apple cider vinegar, makes a great base to add all sorts of ingredients, be it peppers, pineapple, grapefruit juice, bacon … the list goes on. As long as you keep it on a low simmer, you can’t screw it up. Not sweet enough? Add more brown sugar. Too thin? Add a little molasses. Needs more heat? Cayenne pepper or a shot of Tabasco. And so on. It’s fun to experiment and you’ll be impressed by the results.