Home » Dish » How to Use Celeriac 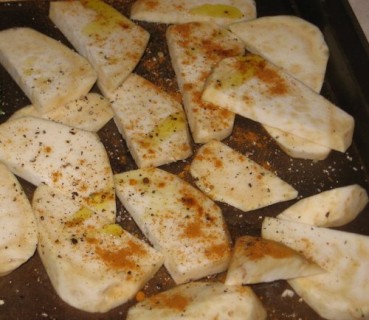 In case you haven’t noticed grocery stores are working diligently to be beautiful. I, for one, can hardly enter the whirring doors of a supermarket without being mesmerized by the glistening stacks of blushing pink ladies and rounded columns of orange carrots with green fronds flowing. And somewhere, usually tucked between green and white ribbed fennel and red orbs of radish sits Celeriac, the ugly stepchild of root vegetables, gnarled, rough, brown and easily passed over. Visually it’s a wart on the unblemished skin of the produce isle. But vegetables are like people and beauty is only skin deep, a little work with this humble tuber can yield great rewards.

Celeriac, also known as celery root, has crisp white flesh that tastes like, well, celery. It’s not quite as strong as celery and lacks its bitterness, some refer to its flavor as a combination of celery and parsley or cauliflower, but for me, it’s basically a subtle celery flavor, which makes it a great substitute in recipes where you might want the flavor but not the texture of its tall and stringy cousin. It often comes with green celery-like stalks attached. They are pungent and generally discarded, although celeriac stalks are sometimes used to make stock.

When purchasing Celeriac select one that is firm and without soft spots, which indicate rot. Ideally the green stalks attached are not wilted, but you’re more likely to find that at the farmer’s market. It’s best to store this tuber in the refrigerator in its own bag. Although its not a nutritional powerhouse Celeriac is high in certain minerals such as magnesium and phosphorus, and low in calories only about 40 per cup, which is exactly why the following recipe isn’t quite as bad as it seems.

Creamed Celeriac with Leeks and Bacon

Cook 8 strips of bacon. Drain on paper towels and set aside. Heat 1 teaspoon of oil in a saucepan. Wash, peel and cube 1 mid-sized celeriac. Add to pan and sauté over medium high heat for about 15 minutes. Cut 1 leek lengthwise, using only the white parts. Slice into half-moons, wash well and add to pan. Add 1 tablespoon unsalted butter, salt, pepper and 3 fresh thyme sprigs to pan. Sauté for another 10 minutes until celeriac is crisp-tender. Add ½ cup of heavy cream and stir until thickened and reduced. Chop bacon. Discard thyme stems; divide celeriac among four plates and sprinkle top with chopped bacon.

Preheat oven to 400 degrees. Wash and peel 1 celeriac. Cut in half then slice ½ inch segments. Place on cookie sheet. Drizzle with olive oil. Sprinkle with kosher salt, freshly ground pepper and 1.5 teaspoons curry powder. Using your hands move celeriac around to make sure it is coated in the spices and oil. Place in oven. Cook for about 15-20 minutes flipping halfway through. Celeriac should be crispy and brown on the outside and soft on the inside.

Is there a piece of produce that’s put you in a pickle? If so, email the writer at miller.summer@gmail.com