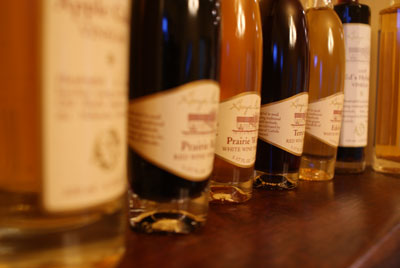 I woke after a few hours of sleep on the first Saturday in January to drive from Omaha six hours west to ranch country, to visit a man who makes artisanal vinegar. I was affectionately referring to it as the vinegar pilgrimage among friends, family and seven people from Metropolitan Community College’s Institute for Culinary Arts who accompanied me. Even that weekend’s dour weather forecast didn’t squelch our enthusiasm. We loaded into a sports utility vehicle and one of those oversized trucks with four doors and an extra-long bed, thankful in the end when it snowed eight inches. I had met George Johnson of George Paul Vinegar at the Emerging Terrain dinner for 500 in October. The chefs who orchestrated the four-course meal were raving about his vinegar as if he had discovered America. Chef Matthew Taylor of the Lied Lodge and Conference Center claimed it was better than the vinegar served at Cyrus, a Michelin two-star restaurant where he worked in Napa Valley, Calif. It was something of a discovery for me that vinegar could be as diverse as wine. There was the house white zinfandel, and a 1941 Chateau Mouton Rothschild and everything in between. I love vinegar. I crave it like people crave hot sauce. When I think about it, my mouth excretes sweet juices to combat the intense sour soon to come; I drool, like one of Pavlov’s dogs. I confess (though I hate to in print), I’ve been known to drink leftover juice straight from the pickle jar, and always pour too much vinaigrette on my salad, just so I can clean the plate with a piece of bread. But I hadn’t realized a certain balsamic vinegar could say just as much as a particular pinot noir. George Johnson lives in Cody, Neb., which is pretty much the definition of the middle of nowhere. The town has 80 residents, leftover from its days when the train used to travel through, a much straighter lot of folks than the ones who used to run the village’s numerous and purportedly crooked casinos. The Cowboy Trail, a railroad track converted into a bicycle path, goes through Cody following Highway 20 part of the way. Johnson has worked all his life as an entrepreneur, involving himself in little businesses here and there. Making vinegar is his retirement hobby. Of the Cody residents, he says, “They got over thinking I’m crazy. It seems like I’m always doing something. They’re very supportive.” Daughter Emily, who splits time between Portland, Ore., and Nebraska, helps him. It was her friend who got him interested in making vinegar from the Nebraska wine he was experimenting with. Johnson started “tinkering” with grapes and wine, and eventually vinegar, in 2004. He started planting grapes in 2009 in earnest. The first vinegar, the Prairie White, was released in 2008. The Prairie White that customers and restaurants buy today is the same golden stuff. Vinegar is made from wine with the help of bacteria. Acetobacter, which essentially eats alcohol and spits out acetic acid over a period of several months, is a bacteria culture that lives on the wine in Johnson’s barrels. Each bacteria culture is as unique as a set of DNA and produces a vinegar that doesn’t taste like anything else. The bacteria lives in a vat of wine (not a bad existence) doing its thing until the vinegar reaches a certain percentage of acetic acid and the vinegar maker decides it is at its peak; then the artisan removes some of the vinegar and replenishes the stock with more wine. The process is part luck, part skill, and part perseverance. Johnson and his daughter have thrown away bacteria cultures that haven’t produced tasty vinegar. They’ve developed seven successful acetobacter strains that feast on several kinds of wine, including a raspberry wine and apple cider. The resulting vinegars are surprisingly light and crisp. Chef Øystein Solberg, an instructor at the Institute for Culinary Arts, was extolling the beauties of the vinegar quite effusively that afternoon in January. He swears he drinks it straight from the bottle. After tasting it, I believe him. The Culinary Institute serves the vinegar at the Sage Bistro on occasion, as does the Boiler Room, Grey Plume, V. Mertz, the Omaha Country Club and Dario’s Brasserie. Enthusiasts can buy George Paul Vinegar at La Buvette, where it is also used by Chef Julie Friederick, and Whole Foods Market. For more information, visit georgepaulvinegar.com.