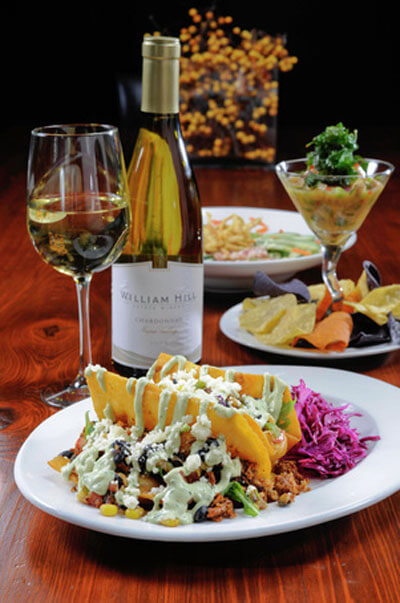 7 Monkeys has become the 7M Grill, but much has changed beyond this minor name adjustment. 7M Grill is now more of a restaurant than a bar, thanks to a new menu and a different business approach. 7 Monkeys opened at 158th & Maple in 2006, and was one of the first restaurants I reviewed for Dish. It was an upscale lounge that offered a relatively adventurous menu for this chain-dominated part of Omaha. Graeme Swain purchased 7 Monkeys last year and reopened it as 7M Grill in November. My wife and I visited on a busy Saturday night. We started with the 7M Ceviche ($7.99), because the menu boldly declared, “We guarantee you’ll love this starter.” It offers tilapia, mangoes, peppers and cilantro in a lime-orange marinade topped with spinach. Ceviche is somewhat uncommon at Omaha restaurants. I’m not sure that I loved it, but I enjoyed the intense citrus flavor. I tried the 7M Fish Tacos ($13.99), with baked tilapia, black bean corn salsa and lettuce in two slightly crispy shells. They are served with avocado cilantro cream. Swain said in a later interview that fish tacos are 7M’s most popular dish. The stars here are the accompaniments. Tilapia is a mild fish, and I’m not sure you’d notice if it was left out, but I enjoyed the salsa and cilantro. Entrees come with soup or salad, so I had the Seafood Stew. The fish was well-prepared and the vegetables fresh, although there was too much cumin for my taste. My wife is a sucker for specials, and enjoyed the Pistachio Chicken ($16.99). It was expertly cooked, moist and not chewy, and well complemented by the cilantro cream sauce. Swain said 7M has been experimenting with many specials, and is not currently offering the Pistachio Chicken. He swears the new specials are even better. My wife also liked the Reuben Soup, with a buttery cream base and hint of Thousand Island dressing. If you like Reuben sandwiches, you’ll probably like this liquid version. 7M’s menu offers 16 entrees, seven salads and seven sandwiches, along with rotating specials. Swain said that 7M Caribbean Chicken ($13.99) and Strawberry Balsamic Tenderloin ($24.99) are also popular. However, different dishes may be offered when you visit. “We are rolling out a new menu in the next few weeks. It’s all the best specials, plus new stuff,” Swain said. “It will reflect spring, with experimenting with colors, and things like berry sauces and mangoes.” We paid about $60 for an appetizer, two entrees and two glasses of wine. The décor at 7 Monkeys was a slightly disjointed blend of sports bar and urban bistro. 7M Grill offers a more subdued color scheme, along with art from Dundee Gallery. Swain said much of it is from local artists. There are perhaps 25 tables and a small bar. Service was quick and efficient, despite the Saturday night crowd. wain is a software entrepreneur, and 7M Grill is his first restaurant. Although he enjoys the social aspects of running a restaurant, he is making decisions in a businesslike manner. He chose his restaurant’s name and hired chef Aron Mackevicius with the help of multiple focus groups. Swain and his chef then planned the menu. “It was us sitting around and discussing lots of options,” Swain said. “I told him about flavors I liked, and he took things from lots of places internationally.” Those focus groups also produced the Chef’s Table, which the owner said is becoming popular. Groups of six to 10 people can book the private back room. They are served seven of the “greatest hits” from 7M’s menu, and receive two complimentary bottles of wine, at a cost of $55 per person. Swain’s biggest change has been altering the focus of the business. 7 Monkeys felt like a lounge with food, but 7M Grill is a restaurant that serves drinks. Back in 2006, I wrote of 7 Monkeys, “Anyone with the nerve to offer something a bit out-of-the ordinary in this part of town deserves your support.” That sentiment remains unchanged. 7M Grill offers a diverse menu with a few ambitious twists, and it should please just about everyone who lives or works in northwest Omaha. 7M Grill is located at 15805 W. Maple Road. Its hour are Mon.-Tues. 11 a.m.-10 p.m., Wed.Thurs. 11 a.m.-11 p.m., Fri.-Sat. 11 a.m. to midnight and Sunday 11 a.m.-9 p.m. For more information call 402.509.3225 or visit 7mgrill.com.