Home » Dish » Nick Bartholomew: A Study in Taking it (Over) Easy 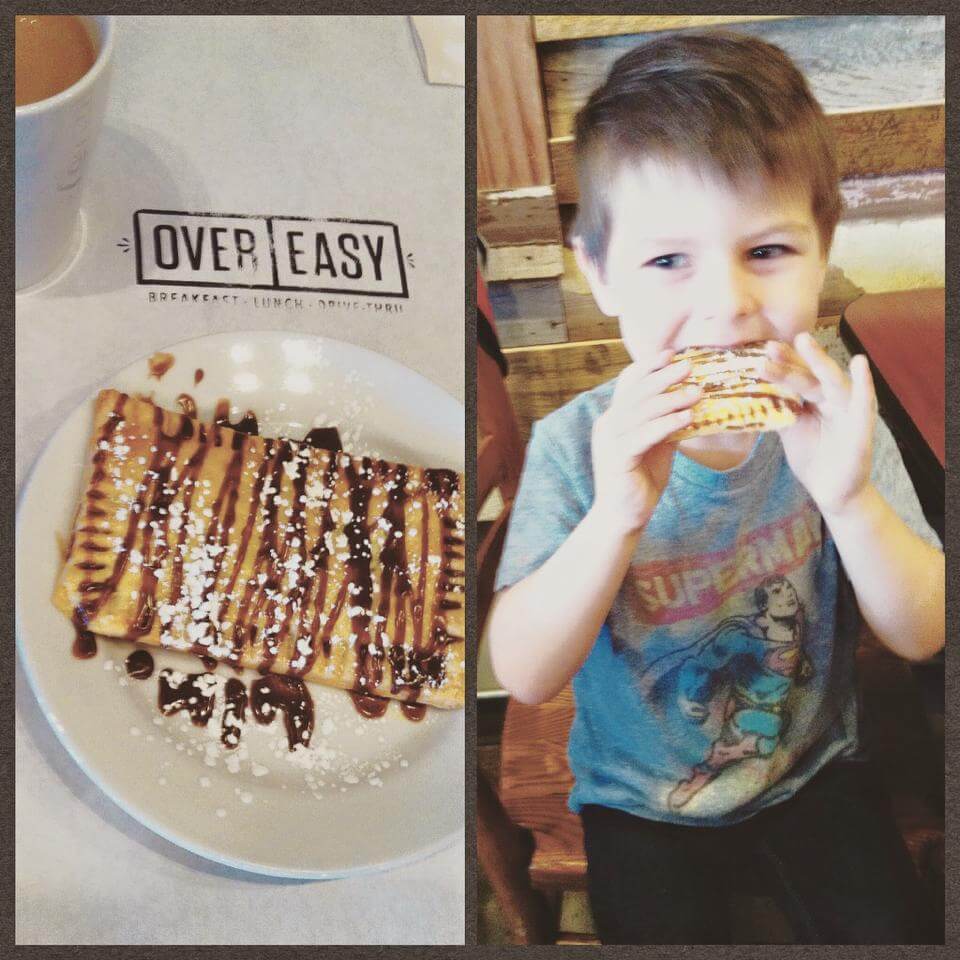 A Dream on Fire

Having seen the scarred remains of 11th and Howard first hand, I thought for a long time about what I would say to Market House owner Nick Bartholomew when I met him for lunch at his West Omaha eatery, Over Easy. I had decided the tragedy of it all has been well communicated and was resolved not to discuss the damage or any of what he lost, but to focus instead on his other ventures. I knew he was planning a second location for Over Easy, and that he is working on a cocktail lounge in Dundee, but there isn’t often much to say about someone that a simple Google search couldn’t tell you. Stock Broker turned breakfast joint owner. Restaurant Startup. What else could there be? Answer: I should have brought a bigger notebook.

The Things That Pop Up Around Here

I sat with my two toddlers taking in the chatter of the full dining room as we waited for a table at the trendy restaurant on 168th and Q. A young couple engrossed in a conversation paused any time a plate was brought to a nearby table, taking lustful inventory of each dish. A flock of well-dressed 20-something women examined files to go over during a light working lunch. Parents grinned at their small children digging gleefully into their meal as an elderly couple sipped coffee and grinned at the parents. I could have watched forever, but soon we were ushered to our table. Within minutes, a decadent Nutella Pop-Tart was delivered, alongside a cinnamon roll topped with warm brown butter frosting for one of my dining companions. My 3 year old son made an instant claim on the Pop-Tart by licking it, and was soon covered cheek to cheek in hazelnut, cocoa, and a smile.

Our patient waitress visited our table 3 times to inquire if we were ready to order, but we found that choosing between the locally sourced, gravy covered, batter dipped items was anything but over-easy. I finally settled on the chicken salad sandwich with hash brown rounds and a side of balsamic ketchup. The Reader’s photographer, Debra Kaplan, selected vegetarian biscuits and gravy, while my 3 year old (who got to order a meal of his own for the first time), picked battered chicken fingers and fries. Bartholomew himself had difficulty choosing his favorite before an order of breakfast tacos was finally settled on.

I would love to tell you that the hash brown rounds were as delicious and crisp as they looked, but they were stolen from my plate by my short, dark, and handsome date before I had the opportunity to sample one. He declared them “Oh yum, Mom!”, and he’s got an honest face, so I opted to believe him.

I’m not going to waste a whole lot of time getting flowery about the food. We know Nick Bartholomew only backs good food. Everyone knows. Gear Magazine knows and named one of Bartholomew’s local ventures one of the 25 best restaurants in the country- so to get this out of the way, the food was good. It was very good. I’ll be back often and you should too.

The meat of this story is Nick. I expected a hang-dog, tired, and circumstance-worn man to meet me that day. In light of his tireless work to lovingly convert Vivace to Market House, knowing he was facing a complete tear down to the studs and a months-long rebuild, an air of temporary defeat would have been forgivable. Instead, the gregarious 34 year old bounced energetically from table to table, greeting guests and playfully tousling the hair of the children throwing French fries in his beloved restaurant. “They’re great!” he grinned, “they’re just enjoying themselves. We love kids. Don’t worry!”

On The Topic of Philanthropic

As the “sometimes vegetarian” sunk his teeth into his lunch of pulled pork and scrambled egg tacos, he involuntarily let out several appreciative “mmmm” sounds, which I couldn’t help smiling at. Between bites, he spoke at length about his team’s efforts to locally source their menus. A chalkboard in the dining area proudly displays Over Easy’s current roster of local farms and suppliers. It’s not the most cost effective way to handle a business, and by no means is it the easiest way, but Bartholomew humbly brushes it off as “the right thing to do”.

A brief discussion ensued about how he became a young business owner, and his work to inspire and reach others came to light. UNO’s CEO program (Collegiate Entrepreneurs Organization) employs such pioneers as Nick to speak to students hoping to follow in his footsteps. Rather than seeing them as seedling competition, he sees an opportunity to infect others with a love of hard work and sustainable mindedness.

As the easy conversation wandered to my little ones sitting beside me, his obvious love of children bloomed into the revelation that, in spite of not having any children of his own yet, he coaches little league in what I will laughingly refer to as his ‘spare time’. “The kids are great, and it’s so fun to watch them work and try so hard… The Gladiators!!!” he beams. “They know they’re not my kids, so they know I’m not rooting for just one of them to win. They all have to try their hardest because nobody gets special treatment from me.”

He Speaks For The Trees

In addition to supporting local farmers and mentoring youth, Bartholomew is a regular Lorax. In December of 2013, he petitioned the court to save a 200 year old tree near his restaurant. Stopping just shy of chaining himself to the trunk, he was unable to save the 20,000 pound cottonwood. The dining room wall at Over Easy is a beautiful mosaic shrine to such reclaimed wood, and Nick can tell you where it all came from. An old church or a dilapidated barn from somewhere deep in Nebraska’s farmland artfully lives on through a transplantation process clearly dear to Nick.

“I love Omaha, and if you can’t do something to better your community, what are you doing here?” He reasons in the face of flattery. The community is clearly just as fond of Nick, seeing the plethora of support being thrown at him from every side. His family at Market House has been parceled off to neighboring restaurants, guest bartending, waiting tables, and hosting pop up events at extended-family-fooderies while they wait for their home to be reconstructed. I mention to Nick that the Omaha food community seems to be a really incestuous business. He laughs in agreement, “We’ve all worked with and for each other at some point. Those are the people you want to hang out with because they’re the ones who get what you’re spending all of your time on. We’ve all dated each other, hated each other, but that’s just what a family does.”

While he works to open a second Over Easy at Aksarben Village, and patiently waits for Market House to be sound enough to begin the rebuild, Bartholomew sets his eyes on Dundee. The corner of 50th and Underwood will get a facelift this summer, and a cocktail lounge with a rooftop patio will take up residence in the former home of Beer and Loathing. “The universe likes to shuffle and reshuffle”, he says with an easy smile, “I can’t wait to see how it reshuffles us.” But the universe has a little help by the deck Nick supplies, stacking it with amazing people and a real talent to back up his passions.

In response to the instant support his Facebook was bombarded with the day of the fire, Nick simply replaced his profile picture with the quote: I survived because the fire inside me burned brighter than the fire around me.

And if you’re not careful in his presence, you may just catch fire, too.