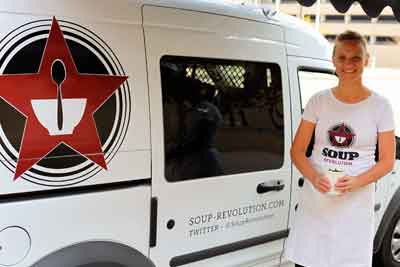 There are a few things you need if your city wants to be considered with the likes of Portland and Austin as a hip American hangout. A definable music scene is a good place to start. Bike lanes, a literal line in the street, seem to serve as a proverbial line in the sand between cool and simply ozone clogging. And lately a bustling food truck scene, which can serve all those late-night and helmet-clad diners, completes the picture. Omaha’s had the music scene for nearly 20 years now, is working on the bike lanes and, thanks to the trailblazing Soup Revolution, isn’t totally truckless. But where’s our mobile food movement? These days you’re nobody until somebody shows up and starts slinging banh mi. America now loves to eat on the street. Zagat started rating food trucks in New York just as they do restaurants with a special guide and website published last November. The Food Network is currently filming its second season of “The Great Food Truck Race,” a sort of “Cannonball Run” for foodies. And in April the first sleek, sexy cookbook featuring food truck recipes from across the country hits the shelves, perhaps the surest sign of cultural saturation. But in Omaha, the brightest culinary minds and artisanal offerings remain mostly locked up in bricks and mortar. Are we uncool? Jere Ferrazzo, a food and drink supervisor with the Douglas County Health Department, thinks Omaha might literally be too cool. “The first difference about Omaha is the weather,” Ferrazzo says. “There are so many restaurants here that a lot of people don’t want to sit outside in the cold to eat off a truck.” There’s also the issue of a special permit requiring local mobile vendors to operate out of a commercial kitchen. Ferrazzo says that’s a stipulation, along with certain restrictions on where the trucks can set up shop, that frequently dashes dreams of street food glory. But the one person actually doing it in Omaha, Soup Revolution owner and chef Sara Demars Cerasoli, has a different answer. Her business recently celebrated its first anniversary and, together with the handful of taco trucks canvassing South Omaha daily — which, while delicious, operate more out of a long-standing cultural tradition, rather than any nod to the current mobile food movement — constitutes the entire scene in Omaha. “I think people are underestimating how difficult it really is,” she says. “The minute you want to do a gourmet truck, you need to build a kitchen in your truck. In New York, to buy one of those trucks it’s $250,000. Here you can open your restaurant for $250,000.” While cost may be a primary reason the streets of Omaha aren’t awash with chicken frankies, there’s also the issue of labor. Food trucks nationwide are billed as an easy, cost-effective way to take gourmet food to the people; but getting one on the street is, in the end, a lot of hard work. “It took me two years to develop my business plan and to build my van,” Cerasoli says. “It was the most painful two years of my life. But now I get calls daily, not just from Omaha but from all over the world, asking how we did it.” Other cities have been active in their pursuit of the latest culinary trend. In Boston, Mayor Thomas Menino has created a food truck task force and a new website that combines all the various city permits into one simple application. This winter the city held its first ever Food Truck Challenge, awarding three winners permits and prime spots on City Hall Plaza. Ferrazzo says Omaha hasn’t been quite so aggressive in its attempt to lure new vendors. For now the city is still taking a case-by-case approach to mobile food even as the calls come in more frequently. Although the difference in cost between a restaurant and a restaurant on wheels isn’t as great in Omaha as it is in Los Angeles or New York City, Cerasoli remains confident that the freedom a food truck offers will eventually lead to more of them on our city streets. “It will happen,” she says. “Everything is do-it-yourself right now. You may not be able to get investors and designers and architects but you can definitely build this cute little shack. You can run the whole thing by yourself.” Put that way, a food truck sounds more like the old-fashioned American dream rather than the hottest new trend in American eating, and Omaha is a city that appreciates freedom. If that’s all that’s standing between us and eating french fries fried in duck fat on some random corner of Farnam Street, then, by all means, let freedom ring.