Home » Dish » Poutine on the Ritz

Poutine ranks beside maple syrup and overwhelming politeness as one of the best things to come out of Canada (I’m not into hockey). The basic premise — French fries, cheese curds and gravy — is a cardiologist’s nightmare but a food lover’s dream. Its simplicity also makes it a perfect dish for a chef to show some creativity and personality, jazzing up the gravy or sprinkling a little something special on top. If I see poutine on a restaurant menu, there is a very good chance I’m ordering it. Possibly as my entire meal (because, let’s be honest, even if you’re in a pig-out mood, it’s a pretty heavy dish). Omaha is blessed with several good poutine access points. Read on for a list of don’t-miss dishes around town. 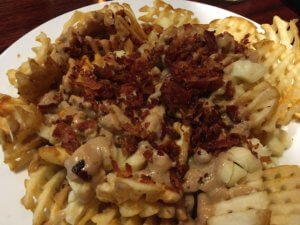 I love a good waffle fry, and they’re also ideal for poutine because they hold on to all that cheesy gravy goodness. The curds are served cold and hard, which isn’t my favorite, but not a deal-breaker either. The gravy sets this dish apart, with a well-seasoned and bright flavor. And, of course, what isn’t better with a little candied bacon sprinkled on top? 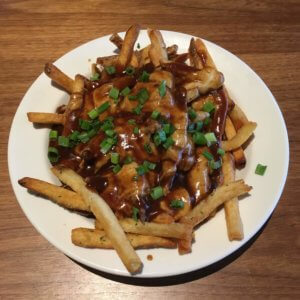 These fries were hot and crispy, the base of any good poutine and honestly good enough to enjoy on their own. The gravy was delicious, with a deep, savory flavor and conservative use of salt, which is good because the fries were salted enough to stand on their own. The dish was thoroughly covered in soft, warm and melty cheese curds, which held their temperature. Even while accepting this dish as my entire meal and not an appetizer, I was uncomfortably full halfway through. Plan to share with a friend. 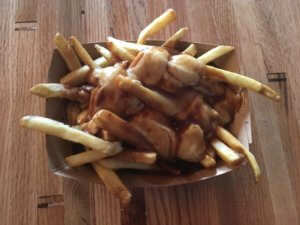 A+ for gooey cheesy meltiness. I was able to fully extend my arm, and the cheese was still stretching. But eat fast! By the time I was done, the cheese had returned to its solid state. Block 16’s gravy is rich, salty and beefy. While the restaurant is known for its adventurous flavors, this classic poutine is basic. If you want something weird and exciting, Block 16 has a full menu of creative options. The gravy is served so generously that by the end of my meal I was left with a happy little boat of it, which my one-year-old happily ate with a spoon.

I originally dismissed this dish for the purposes of this article as not true poutine, but the gravy is special enough I felt the need to include it. The outside of the croquettes is deliciously crispy, and the inside is beautifully soft and fluffy. The potato feels under-seasoned, which is a bummer only until the moment you try the gravy. Then you are glad for a blank slate to serve as a vehicle for the drippy, delicious accoutrement. The gravy is lighter than the others in town, a creamier tan compared to the usual dark mahogany, with a prominent sage flavor. The cheese inside the croquette is completely molten and gives me more of a cheese-cube vibe than cheese curd. It’s not strictly poutine, but it is something special. 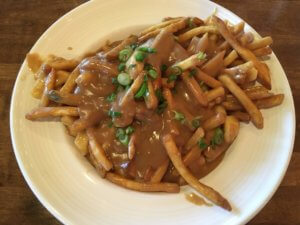 Holding true to classic Shirley’s style, the portion size is massive. The fries are densely packed, and the cheese curds and gravy are generous. It feels like five pounds of food. The gravy is milder, less intensely meaty than others. It reminds me of Thanksgiving. The cheese curds have the squeaky firmness that I’m told by Canadians is a sign of ideal curd quality. Despite being nice and warm under their gravy blanket, these curds held their shape. Shirley’s version is served with fresh, flavorful green onions as a colorful garnish to brighten the dish. Overall, it feels like the Canadian version of the chili cheese fries I’d get at a diner with friends in high school.

The gravy at Winchester’s is maybe the best, most richly flavorful of all the ones I’ve tried. There are little bits of celery and carrot hidden in it, offering a hearty, homemade richness to the experience of dining out. Curly fries are usually my jam, but in this case, I didn’t feel they were any better than any other application. The cotija also didn’t live up to expectations. The cheese curds were fried, which made them more like an amazing side than a fully incorporated element of the poutine. The gravy alone could entice me to come back, if only to see what other dishes they pair it with.

Did I miss your favorite? Let me know!

***Editor’s note:
This month’s review is brought to you by Ariella Rohr. Ariella is a member of the local group Omaha Food Lovers on Facebook. Become a member to join in lively discussions about area eateries, food fads and fun local finds.