Home » Dish » Some Good Food News to Boost Your Mood

There isn’t an industry that has gotten by unscathed since Covid-19 struck in earnest, shutting down much of the global economy. Restaurants were hit hard as diners were forced indoors, but Omaha entrée-preneurs are finding touching ways to hit back.

Nick Bartholomew hit the UNO Reverse on his outdoor venue Dandelion, teaming up with other area chefs and restaurant owners  to feed those in need. Taking on surplus food from restaurants who won’t manage to get through their stock, the team has been preparing to-go meals for those hit hardest. The effort is also a means to employ those left without work as restaurants adapt. Able-bodied volunteers, those with supplies to donate, and anyone interested in donating financially to the cause can do so by visiting Dandelion on Facebook

Who Tells Your Story

Renowned Omaha photographer Josh Foo is collaborating with fellow artist Lauren Abell, adding humanity to the current Corona crisis. In their honest and unflinching series, Right Here Right Now highlights the impact being felt by local industry workers and the efforts to hold on to the communities they’ve built.

Nina Sodji’s story starts in Togo, South Africa and is filled with hard work, dedication to her community, and starting over as many times as it takes. Nina opened Okra African Grill on March 14th at 1303 S 72nd. The menu is comprised of fresh ingredients combined in a delicious reflection of our shared global history.

While the rest of the city was shutting down, Square Donut was ready to make its debut! In spite of a rough start, the shop managed to open on March 16th before closing down to reevaluate. They’ll be reopening Thursday at 15825 W. Maple Rd with a to-go menu. 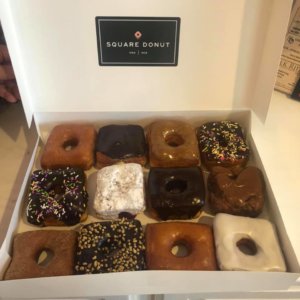 Living in such a fluid situation means that restaurants are in a wait-and-see stance. Many have adjusted to offer to-go and pick up orders, while others have hired their wait staff as delivery drivers. Liquor laws have been adjusted as well, allowing many establishments to offer cocktail mixes and whole bottles. Follow us on Instagram at @TheReaderOmahaDish where we share stories updating you about restaurants’ status.