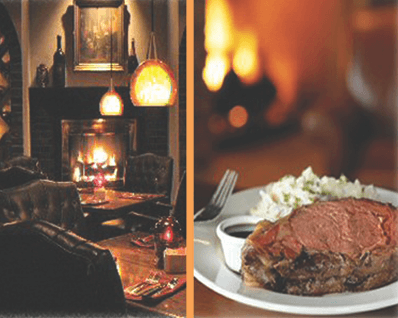 Eating at Brother Sebastian’s is like taking a trip back in time to Omaha’s past. I mean that in the nicest possible way.

If you are of a certain age, you might recall the restaurants that once dominated the local dining scene. Lengthy menus offered numerous versions of steak. Entrees came with multiple side dishes, and the dining rooms were dark and woody.

Brother Sebastian’s Steak House & Winery proudly upholds that heritage. It opened in 1977, and has been following a successful formula ever since.

I first visited Brother Sebastian’s for my high school senior prom in the ‘80s, and was interested to return and see how the place was holding up in a changing world.

My wife and I visited on a busy Saturday night. Our meal began with a basket of extremely soft white bread and a trip to the salad bar, which gets its own room at Brother Sebastian’s.

My wife ordered the Filet Oscar ($31.75), topped with hollandaise sauce, crab, and asparagus, and expertly cooked medium-rare. The large chunks of crab and crisp asparagus were strong accompaniments to the thick cut of meat.

I tried the Shrimp Sautee ($21.95), with sautéed shrimp and mushrooms atop white rice.  Shrimp is sometimes overcooked locally, but this was well prepared. This is a mildly flavored dish designed to appeal to a broad audience, but it was still satisfying.

Both of our dinners came with a baked potato, tasty grilled zucchini, and still more bread. I am not sure how anyone here is hungry for dessert.

There is also a lengthy wine list dominated by traditional French and California labels.

Brother Sebastian’s may seem like a blast from the past, but prices are certainly up to date. Before tip, we paid about $78 for two dinners and glasses of wine.

General manager Scott Lurry describes his menu as “traditional Omaha steakhouse.” The majority of items have been offered since the beginning, with a few selections added in the ensuring years.

Prime rib is the most popular, according to Lurry, followed by New York strip and several other variations of steak.

“We’re beef heavy,” Lurry said in a later interview. “We also offer a fairly standard selection of fish and chicken items with our own creative spin.”

That traditional approach extends to the décor. It’s a big restaurant, seating over 200 patrons, but is broken into multiple rooms holding about 30 diners each. For example, we sat in the Contemplation Room.

“We are quiet, cozy, romantic,” Lurry said. “Without all of the walls, it would be very loud. When the fireplaces get going in the winter, that really transforms everything as well.”

The medieval monastery theme has been preserved, with wine racks and exposed wooden beams everywhere. Yes, the sounds of chanting monks can still be heard in the parking lot.

Despite the Saturday night crowd, our meals were delivered quickly.  The employees who served us were experienced, efficient and knowledgeable about the menu.

The most experienced of those employees might be Lurry, who has worked at Brother Sebastian’s for 31 years and has been general manager for 28 of those years.

“It was supposed to be a summer bartending job,” he said. “I was in my 20’s when I started here, and ended up never leaving.”

Surprisingly, Lurry said that change may be coming to Brother Sebastian’s. He is in the early stages of planning possible menu and décor revisions, although he declined to offer any specifics.

“I know we are thought of as an old, unchanging place, and we don’t want to be that,” Lurry said. “We will probably make some updates while still preserving what everyone likes here.”

Your opinion of Brother Sebastian’s will likely depend on your view of traditional Omaha dining. If you love the steakhouse experience, you will have a good time here. If you seek newer trends or a lighter cuisine, you should probably go somewhere else.

Brother Sebastian’s has been drawing crowds for over 30 years by offering a consistent, high-quality product.

My life has changed dramatically since that long-ago prom night, but it’s nice to know that some things have remained the same.