I like to give places a chance to work out their opening kinks and jitters before writing a review, and I gave Early Bird longer than most. I also save your time by never offering simple “I liked it” or “I didn’t like it”, because what does my liking it have anything to do with what it actually is? Did you know that there are people who LIKE kale? Not me. Would you trust my review of kale?

Instead, I try to tell you about places with vision, passion, and excellent execution. As the modern-day poet, MeatLoaf once said, two out of three ain’t bad… usually. But the poor execution of Early Bird’s excellent menu left me both stuffed and underwhelmed.

The menu ranges from the fun to the fancy. Cereal Killer Pancakes offer a vanilla glaze over your favorite breakfast cereal, and if fruity pebble pancakes don’t wake up your inner child, you need to see your inner-child psychologist. A Spinach Salmon Salad appeals to the more mature palate, and a glance across the board shows something for every appetite in between.

I was excited to finally pop by, and spent a good amount of time agonizing over what to order before I even left my home, but arrived on a late Wednesday morning with a good idea and a very big appetite.

We were seated in a very cute booth and had plenty of time to take in our surroundings before our waiter arrived to ask if we wanted water. Plenty of time. 25 minutes, actually. We were among 4 tables with guests seated, but staff seemed distracted by something. By the end of the visit, my guest and I both needed to use our ParkOmaha app to add money to our meters, which ran out before we had been served our food.

When our waiter did arrive, it was hard not to be put off by his presentation. A wrinkled, food-splattered uniform and the overall appearance that he had slept in his car was actually pretty easily forgiven when I considered that perhaps this wasn’t his shift. Maybe he was covering for someone. Maybe he DID sleep in his car. It’s very easy to judge people by their initial appearance, but I do my best to be considerate.

We ordered mimosas and he carded us both. My guest and I are both in our… somewhere… early-to-mid thirties, so we smiled and laughed as we handed him our ids. “Wow. You’re… a lot older than I would have guessed…”Thanks, Chad or Hunter or whatever your name is. So is your mom.

My guest ordered the Morning Pot Pie, and I opted for the El Gordo Morning Burrito. Chad or Hunter or whatever declared, “Do you want a to-go box with that burrito? You’re not going to be able to finish it…” Don’t worry Chad. You don’t get this amazing physique by not being able to finish your food.

Our Mimosas arrived… warm, flat, and in a sticky, half-full glass. I said half full, not half empty, so as you can see, I am really trying here.

I asked our waiter if this was how they were always served, or if we had been served someone’s leftovers. He shrugged “Maybe it got spilled.”

Our meal arrived, and he was correct in his declaration that it was a very generous serving. 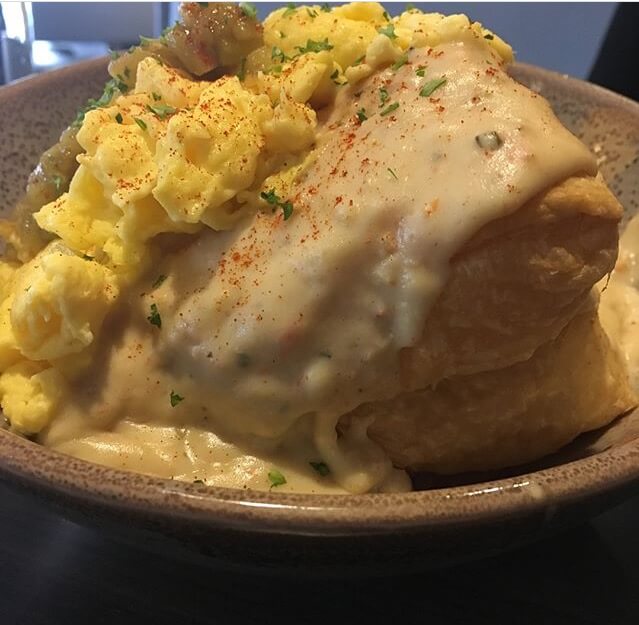 My guest broke into the puff pastry of her pot pie and she herself deflated. “It’s… it’s raw.” We gestured to our waiter, who made eye contact and then wandered off. She muscled through a few bites, but the turkey sausage gravy was cold and the pastry was gluey, so she threw in the towel and sat forking her dish for the next 20 minutes. Yeah, I said forking. I don’t usually do bad reviews, so I’m trying to compensate by being funny. 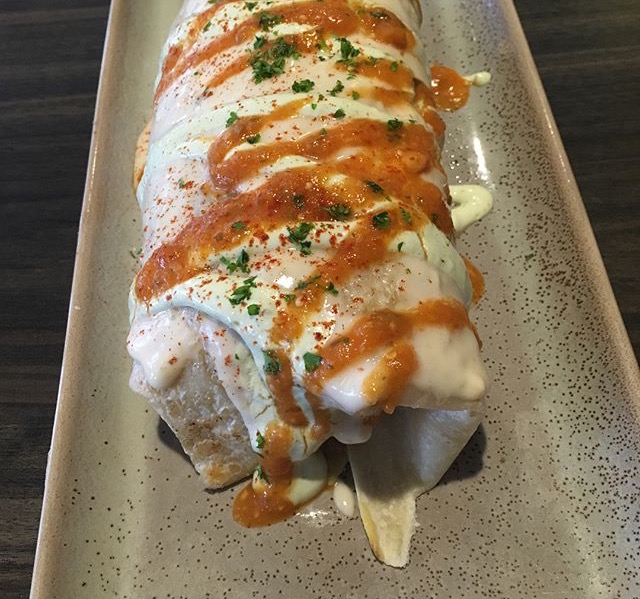 I offered to split my burrito, but after a bite she smiled tightly and said “No, I’m good.”

She had a point. Once I overcame the stale tortilla, the rest of the colossal, cold concoction was overtaken by the flavor of spent fry oil in the hashbrowns. It wasn’t good, but ya know. There was a lot of it… 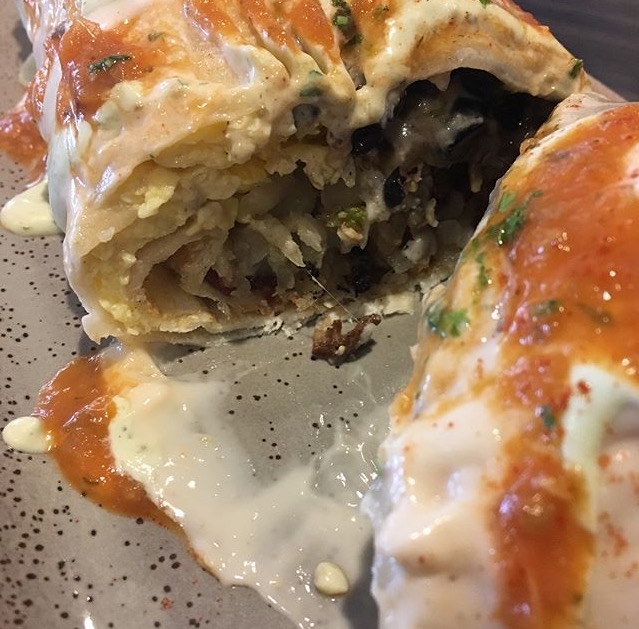 This was clearly a well thought out dish, and the ingredients would have been perfect together had more care been taken in this day’s preparations.

When our waiter returned with the bill, I showed him her under-cooked pastry and explained that everything was cold and wasn’t cooked properly. He shrugged and offered “It’s just wet from the gravy. It’s supposed to be that way.” I asked him if there was someone we might express our many concerns to and he replied “Not today…”

I’m not mad that it was just an expensive greasy spoon, I’m mad that the apathetic execution doesn’t match the clearly tireless and inspired effort that went into the construction and intent of the establishment.

Someone cared a lot about putting this place together. The staff needs to get it together and be respectful of the vision they represent.