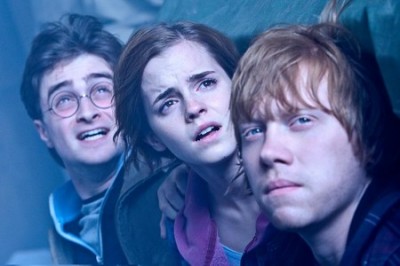 When the first outbreak of “Harry Potter” fever hit, I was old enough to find J.K. Rowling’s minutiae-laden prose unappealing, old enough to slightly sour at the taste of her light revisions to the epic journey recipe. Worse still, I was not yet old enough to have my own children with wide-eyed imaginations strong enough to obscure those faults on my behalf. In short, I find myself inside the smallest sliver of the global population pie chart: I’m on the outside of a phenomenon looking in.

So please understand when I tell you that I found Harry Potter and the Deathly Hallows Part 2 to be good but not great, this is not a condemnation of the dogged fanaticism felt by you legions of quality human beings out there. It’s just that, objectively, it’s really nothing inherently awesome.

Hear me out: When last we left our heroes, Harry (Daniel Radcliffe), Hermione (Emma Watson) and Ron (Rupert Grint),  they were slowly preparing for an epic showdown with the nasally challenged Voldemort (Ralph Fiennes), doer of bad things for the sake of having done bad things.

Despite seven movies, I’m still at a loss to tell you exactly what would happen should Voldemort smite our bespectacled hero. Would he simply insist that everyone dress in black and sport bad dental work, like most of his followers? Would he take over the human realm as well, or just whatever weird, imprecise geographical location this series has taken place in?

And while I’m asking questions, why is it that wizards can do some things using magic and not others? Why can’t they wave a wand and make a new car appear but they can create force fields out of thin air? And those questions don’t represent the most troubling void of information: Other than a few superficial character beats, I don’t really know much about any of these characters, save Harry. I know Hermione is smart and Ron is dorky, but after nearly 20 hours of movies, shouldn’t I know more than that?

And shouldn’t there be some kind of twist or surprise in this final outing? I was only surprised this time out when the aborted fetus of Voldemort appeared in heaven, which to be fair, was really surprising. But the events of the battle, while really pretty to look at, were only shocking to those unfamiliar with any work of epic fiction. Although I enjoyed the midsection of this series, those that were carried by the surprisingly talented cast, the beginning and end were just paint-by-numbers fantasy and nothing more.

Thus, the legacy of the movie series is a triumph of loyal adaptation and pleasing visuals but a shocking lack of anything truly “new.” And lest you think that to be a mean-spirited dismissal, I’d like to point out another startlingly derivative narrative: Star Wars. I love that series, flaws and all, and thus wouldn’t dream of begrudging those who would swap Han Solo for Harry, even if I don’t get it myself.

Hell, at least your final film didn’t have Ewoks.