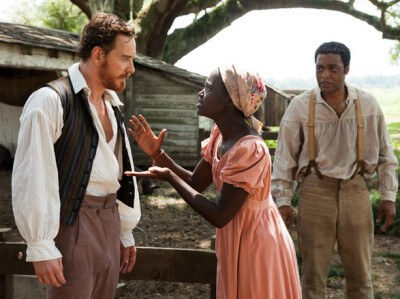 New rule: You can watch Django Unchained as many times as you want, but you have to watch 12 Years a Slave at least once first. What Quentin Tarantino sensationalized and spaghetti-Westerned up, writer John Ridley and director Steve McQueen pared down to its barest, most brutal essentials. Slavery, the ghost of American prosperity and invisible shackle that still pins down inner city bootstraps, has never been shown this honestly on screen. 12 Years a Slave occupies that sparsely inhabited place beyond Oscar statues and Tomatometer scores, in the upper stratosphere of movies that act as time machine and history professor. It is, for want of a better word, important.

Based on the memoir of Solomon Northup, a free man kidnapped and sold as a slave, the film never once slips into exploitation or melodrama, never fetishizes the violence nor veers into overt moralizing. When Solomon (Chiwetel Ejiofor) is kidnapped by Brown (Scoot McNairy) and Hamilton (Taran Killam) while on tour as an accomplished musician, he is sold by the slaver Freeman (Paul Giamatti) to the mostly kind Ford (Benedict Cumberbatch). It’s worth noting that McQueen and company never fall victim to the pitfall of most white-helmed slavery-era films, in that no Master is forgiven or shown to be nothing more than a victim of that era’s way of thinking.

After Solmon, given the slave name “Platt,” gets into a dustup with an overseer (Paul Dano), he is sold to the wicked Epps (Michael Fassbender), a master so realistically vile he makes Leonardo DiCaprio’s slave owner in Django Unchained downright cuddly. It is here, on Epps’ cotton farm, that the hellish reality of America’s past leaps from the screen and singes the audience’s hearts and minds. Hope is lost, as we see Solomon finally, horrifyingly become the slave known as Platt. For the empathetic, this is exactly as torturous and painful as it should be.

For as ugly as the content is, McQueen’s film is quite beautiful. Everything is so deliberate, from the long, slow reaction shots of Ejiofor’s watery eyes to the sound of his bare feet struggling in the mud to keep his neck from falling too far into a noose. There is symbolism in every frame, every character. And the film’s resolution toes the perfect tone between much-needed hope and the acknowledgment of a scar that will never heal, not all the way.

Much of this is due to Ejiofor’s performance. He and Fassbender produce the kind of work that only the most dedicated performers can create; neither gnashes or wails to heighten the drama. They realize there’s no need. Simply playing out the truth of these men is enough to craft the most heart-rending of conflicts. Not to be forgotten is newcomer Lupita Nyong’o, whose tortured Patsy will haunt audiences after the credits roll as surely as she haunted Solmon’s heart.

12 Years a Slave is epic, profound and appropriately difficult to watch. It neither needs nor wants Oscar glory, but will get it. And that’s a blessing, provided it urges more people to experience a truth America often tries to run from.