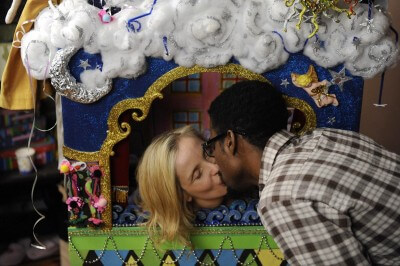 Other than offering a great celebutant joke based on its titular similarity to an infamous sex tape, 2 Days in Paris was stunningly forgettable and a remarkably unlikely target for a sequel. This is to say, there’s no good reason why 2 Days in New York even exists, let alone anything that would explain how it came to be pretty fantastic.

As she was the first time around, Julie Delpy is the writer, director and star here. Unlike the first time around, this Parisian brings it hard in all three facets, delivering hilarious dialogue and believably madcap situations at breakneck pace with a shockingly nuanced performance smack dab in the middle. Hell, she got Chris Rock to do something that marginally resembles acting here, which is just under the “passing a camel through the eye of a needle” difficulty setting.

Delpy again plays Marion, a spirited artist who is less Ai Weiwei and more Woody Allen. After having a child with and then splitting somewhat amicably from Jack, her love interest in 2 Days in Paris, she is now with Mingus (Rock), an Obama-obsessed NPR radio host and writer for The Village Voice. On the eve of the biggest show she’s ever had as an artist, her family arrives from France. This includes her sausage-smuggling, hygiene-challenged father, Jeannot (Albert Delpy); her potentially legally psychotic sister, Rose (Alexia Landeau), and her former boyfriend and current sister’s boyfriend, Manu (Alexandre Nahon).

Immediately, her family drives Mingus insane. After drug deals in the living room, rampant nudity and an inside joke about how Mingus’ name rhymes with the act of oral sex, he begins to lose it. Meanwhile, Marion is trying to balance family dysfunction and career frustration, as her big performance art moment, legally selling her soul to the highest bidder, takes a riotously funny turn thanks to perhaps the best cameo ever for fans of indie film. Somehow, Delpy also manages to fully flesh out a complex relationship, explore inner neuroses and quietly deliver one of the funniest movies of the year. How?

How did this happen? How did Delpy go from muted navel-gazing in 2 Days in Paris to this spectacular blend of comedy and art? Who cares? All that matters is that’s exactly what happened. This isn’t to say everything is absolutely perfect, with Rock threatening to ruin multiple scenes and various characters’ subplots wholly abandoned. But that’s like dismissing a gorgeous painting because of a few stray brushstrokes, as the set-piece comedic moments, dynamic interactions and whimsical overtones all work so damn well.

Beyond the unparalleled genius of the spoiler-protected cameo, the film’s best attribute is its pace. When laughs are more minor, it becomes a quantity versus quality issue, so moving as quickly as possible is essential. Delpy stops when she needs to, but for the most part keeps things rolling; the result is one of the more delightful surprises of the year thus far. 2 Days in New York is lithe, clever, spirited and sincere. That’s a lot of great adjectives for a movie with no reason to exist.