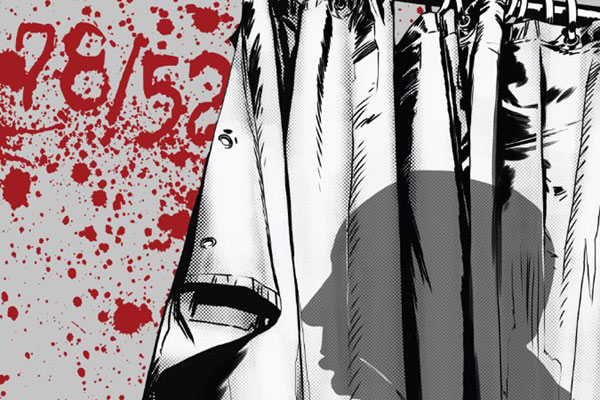 “The death of a beautiful woman is the most poetic topic in the world,” is a such a well-meaning but sleazy Edgar Allen Poe quote that I’m surprised more filmmakers don’t use it to justify the horror genre’s sometimes rampant misogyny. The scuzzy quote kicks off 78/52, a documentary filmed entirely in black and white for no other reason than it explores the famous shower scene in Alfred Hitchcock’s film Psycho (1960) which, you know, was also filmed in black and white. Although not without interesting insights upfront, the black-and-white thing is about as clever as the documentary gets.

What really boggles my mind about 78/52 is the decision to breeze through the bulk of interesting content in the first 30 minutes. Initially, iconic filmmakers from Guillermo del Toro to Martin Scorsese discuss the shower’s scene historical relevance and its context in terms of Hitchcock’s filmography. Before the shower scene, horror films were almost exclusively about fantastical frights, such as giant mutated ants and undead bloodsuckers. The shower scene in Psycho was the first time a horror film scared audiences by introducing the idea of an intruder who invades your personal space. Not only was the shower scene possible, it was downright plausible.

In the context of Hitchcock’s body of work, 78/52 is most fascinating when it shows us just how long Hitchcock had the shower scene on his mind. His films leading up to Psycho were peppered with references to the shower scene he had not yet filmed. One clip from Hitchcock’s Rear Window, released a whole six years before Psycho, shows a character describing the shower scene beat-by-beat as they speculate on a possible murder. Even as a film buff, I’ve never been particularly enthralled by the mystique that surrounds Hitchcock. For the first time ever, seeing how one scene shaped his entire career, I was genuinely interested in the man.

From there, 78/52 is a complete mess. It bounces back and forth from exploring the shower scene, then to Hitchcock’s career, then to Psycho as a whole, back to the shower scene, back to Psycho, back to Hitchcock’s career… And then it takes a weird detour to talk about how Hitchcock filmed toilets. Seriously, what is up with the toilet stuff? On top of being somewhat boring, it’s just exhausting. Transitions between these topics are jarring, and the documentary decides to simply stop fleshing out points after the first half hour. One nasty side effect of rushing through all these ideas is how criticisms of the shower scene are swept under the rug.

A brief segment explores how Psycho contains themes about mothers ruining their sons’ lives and how the shower scene is about how women should be punished for arousing men. Except, the documentary never points out how ugly these themes are. In fact, for as many times as 78/52 proclaims the shower scene as the origin of slasher movies, it never really addresses how that might be, you know, a bad thing. Slasher movies have a well-known history of being none-too-kind to ladies. Considering how unfocused and uninteresting 78/52 becomes, why not just focus on exploring that history and present arguments for us to really grapple with? Instead, the only criticism of the shower scene—literally, you only hear one—is by an interviewee who thinks the iconic silhouette of Norman Bates “mother” looks like a mushroom.