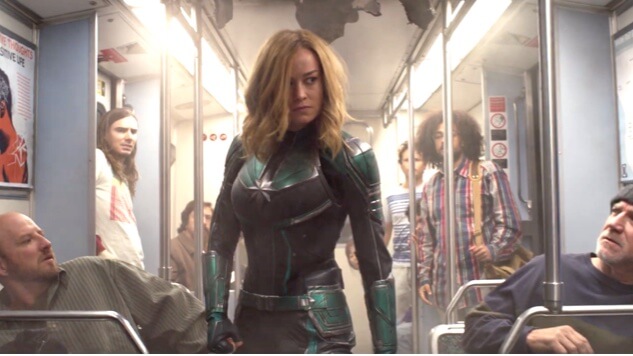 For the first 10 minutes, Captain Marvel choo-choo-chooses to chug-a-lug down the same Green Lantern train tracks that ran over Ryan Reynolds. A vomitorium of needless exposition that may as well have had Annette Benning holding a Wile E. Coyote picket sign reading “We don’t trust you idiots in the audience,” the opening is thankfully little more than a bellyflop by a pretty nimble swimmer. What follows is goofy, blissfully weird and wholly original, when it’s allowed to be.

It’s either a remarkable coincidence or nakedly obvious why the first major Marvel movie with a female lead is also their first film to feel frequently palpably constrained by studio suits; every time Captain Marvel is poised to spill over into the wacky giddiness to which it so clearly wants to succumb, Brie Larson has to put her hands on her hips and stare off into the distance whilst pondering how war is bad for a minute.

Larson actually has a bigger challenge; the wildly uneven script does that old-familiar melodrama “amnesia two-step.” Vers (Larson), whose real name is Carol Danvers, is an alien warrior who can barf laser rainbows from her fists and can’t remember beyond six years ago. After a battle against the Skrulls, shape-shifting baddies, Vers gets stranded on Earth in 1995. There, she discovers secrets about her past while basically starring in a splendid “Oh no! My partner is a space alien!” buddy-cop sitcom with Nick Fury (a digitally de-aged Samuel L. Jackson).

The problem with “who am I?” plots is that they strip actors of their ability to fully define a character. By the end, when Carol is more completely herself and gleefully whooping while testing the limits of her powers, you only wish you had more time with that version of her. Especially when she gets confronted by the extraterrestrial equivalent of a dudebro blogger on twitter yelling “Debate me!” at an elected female politician. Although not quite ideally how to get there, Captain Marvel does render you desperate for more of her.

Those quibbles aside, complaints about this film falling into a stupefied sameness with other superhero movies are totally unfounded. From a plot-centric cat to Ben Mendelsohn’s legitimately surprising turn, whenever writers/directors Anna Boden and Ryan Fleck get the space to make their space opera both sincere and offbeat, it is triumphant. As opposed to something like Aquaman, where the silliness is jarring and too frequently unintentional, Captain Marvel endears itself with its quirky nonsense. This was the first major blockbuster from the duo; they should be brought back and they should be given more latitude to lean into the intimate and weirdo moments at which they so clearly excel.

Complaints about this being boilerplate superhero shenanigans ignore unique traits like the single weirdest needle-drop during a fight sequence in recent memory. Love or hate that moment, it is as bold as the hero who emerges by the end. There is a fresh, creative heartbeat pumping at the center of Captain Marvel that wills it into being something special, even if it could have been somewhat more so.