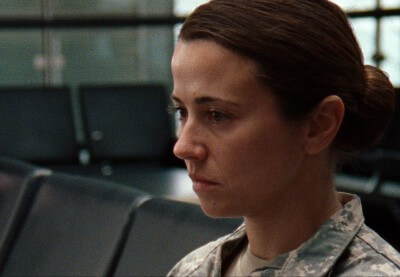 In a stunning turn of events, a woman has written and directed a film about women in which the lead character is a woman who actually acts like a real woman. Flying in the face of Hollywood logic that demands that only those with external genitalia should be responsible for creating films about those without, Return is a deft, nuanced exploration of a wife and mother at war.

Well, technically, writer/director Liza Johnson’s movie follows a female soldier who returns from deployment to discover a much more intense battle at home. This subtle, splendid character study hauntingly reshapes perceptions while presenting a fascinating look at a largely unexplored subject. Well lookie there: It turns out letting a woman tell a woman’s story doesn’t bring forth the apocalypse.

Linda Cardellini, best known for underrated stints on TV in “Freaks and Geeks” and “ER,” plays Kelli, a war veteran with two children and a generally affable plumber husband named Mike (Michael Shannon). When she returns home after a long stretch abroad in an unspecified foreign conflict (take your Middle Eastern pick), Kelli finds that her previous status quo now feels like anything but. Almost instantly, we see that she finds her old friends boring, her old job inconsequential and her old life insufferable.

Kelli is peppered with questions male soldiers probably don’t get asked, like whether or not she gave into the temptation of all those hot, sweaty, muscled men in uniform. In reality, the extramarital boot-knockin’ wasn’t a transgression by Kelli but her husband, who grew restless during his stint as a government-mandated “Mr. Mom.” This sends Kelli into a bender that results in a DUI and subsequent court-mandated alcohol abuse program, where she meets fellow vet and troubled soul, Bud (John Slattery). And just like that, the wheels of what was an ordinary life blow apart, and the sparks fly everywhere.

What makes Return exhilarating is a combination of Cardellini’s gorgeously understated performance and Johnson’s insightful guiding hand. At no point does Kelli devolve into a wailing, helpless caricature. Instead, she’s just lost in a world she no longer recognizes, a world she has no clue how to survive in. There is no flashback justification for her increasingly erratic behavior, no harrowing battlefield tales. The only trauma is culture shock, a far more frightening villain because of its believability.

Shannon shines in a supporting role, but this is Cardellini’s show, and Johnson knows it. Mike’s character only exists to help flesh out Kelli, inverting the natural order of cinematic gender roles as they have come to be accepted. Make no mistake, this isn’t a “message movie” that aims to generalize our female troops. It’s just the quiet tragedy of a woman’s unintentional sacrifice of her former life. It’s just another reminder of the shocking lack of authentically told stories from a female perspective. In other words, don’t look for Return during awards season, but definitely look for it on at-home Pay-Per-View, where it’s available now.