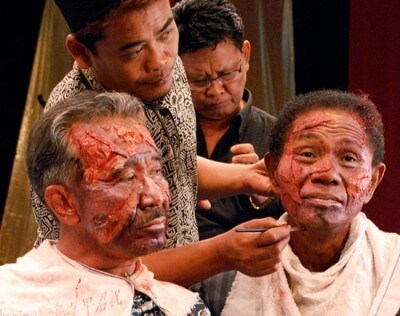 There is a chance, a very real chance, that documentarians Joshua Oppenheimer and Christine Cynn, along with their anonymous co-director, have recorded something never before seen. Hell, they may have recorded something that has never before happened in the whole of human experience. Late in The Act of Killing, a man who has admitted to killing more than 1,000 people realizes the gravity of what he’s done. That moment…dear Lord that moment… It is one of the most singular experiences in the history of film and maybe in the breadth of the history. To see it is to give it permanent residence in your mind.

So let’s work back from that: Anwar Congo was a two-bit, wanna-be gangster selling black market movie tickets on the streets of Indonesia before a failed coup in 1965. In its wake, he became a leader for a death squad in North Sumatra. Most often using wire to garrot his victims, Congo personally murdered hundreds upon hundreds of accused communists, along with ethnic Chinese, and rose to substantial power. It is power he still has, as he is considered a key figure in the paramilitary group that still has hold of government officials throughout the country. That’s right: he’s not in jail, he’s not on trial, he’s not held accountable for his crimes in any way though he openly speaks of his actions.

Along comes Oppenheimer, who proposes something absolutely unthinkable. He convinces Anwar and his friends to re-enact their crimes as movies, using various different Western film styles. A film buff who admits to stealing his method of execution from American gangster movies, Anwar agrees. His past plays out as a Western, a horror film, a musical and so on. When he is called upon to act as the victim and not as the assailant, the seeds of remorse are planted in his addled brain. By the time they grow to fruition, the result is downright jaw-dropping.

The Act of Killing is one of those movies you can talk about until your tongue falls off or someone less obsessed with film within earshot asks you to stop. Was Oppenheimer behaving ethically, allowing a mass murderer to basically present his side of the story? Does the film serve as some kind of long, drawn-out apologia for a genocidal maniac, subtly asking us to forgive the unforgiveable? Or does the movie serve the role that David Frost’s interviews with Richard Nixon served, putting a man on trial (or inviting him to put himself on trial) in the absence of any potential for real legal action?

Whatever the case, The Act of Killing is a brutal, unrelenting cinematic experience. It can’t be reduced to one simple trope or theme and really can’t even evoke one overriding, overarching emotion. It is unimaginable imagination run amok, a glimpse into a reality good people wish simply didn’t exist at all and quite easily one of the most remarkable (if troubling) accomplishments of the year.