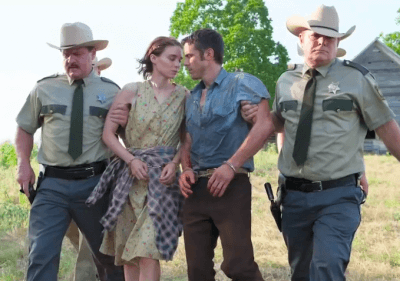 “What’s wrong with me?” My subconscious tries to smother this thought with a mental pillow, but the bastard won’t die.

Throughout the course of writer/director David Lowery’s Ain’t Them Bodies Saints—which most resembles a fictional ménage à trois between Beasts of the Southern Wild, The Assassination of Jesse James by the Coward Robert Ford and your choice of Terrence Malick movie—I profusely self-loathed while rooting for Bob (Casey Affleck) and Ruth (Rooney Mara) to ride off in the sunset together. Seriously, what the hell is wrong with me?

Why in God’s name would I want that? I mean, he’s an escaped convict, and she’s a single mom. He brings violence and death wherever he goes, and she’s reformed her life! He obsesses over her memory, and she’s being courted by a kindly cop (Ben Foster), who I should totally hope she settles down with, but I don’t! It’s like I’m watching the season finale of “The Bachelorette” and screaming “give your lady rose to the man who did hard time!”

To be fair, I’m pretty sure this is what Lowery wanted. From the cursive script that starts the tale, “This happened in Texas,” to the near-Shakespearean march toward the melancholy of “true love,” Ain’t Them Bodies Saints expects you to not only understand the unbreakable, insatiable need of Bob and Ruth to love the shit out of each other but to actively pray they keep doing it. And the word prayer fits here because that’s what the film most represents: a solemn, lonely whisper to the divine, asking for salvation when you know you don’t deserve it.

What’s remarkable is that the affection that serves as the film’s spinal cord is established with splendid minimalism. In a scant 15 minutes, Bob the outlaw goes to jail for the one crime he didn’t commit, even if he’s responsible for it in a different way. He gets whisked away to rot in jail while Ruth delivers their baby girl, who he won’t meet until she’s a toddler. When Bob breaks out, Ruth must choose between the bad man she still loves and the good kid she wants to raise. Her letter to him begins, “Dear Bob, I hope you never get this.”

In a story he recounts, Bob explains “I used to be the devil. Now I’m just a man.” But even he doesn’t believe it. Just like I lament the part of me that wants the couple together, Bob hates the part of him that knows the truth: if he really loved his ex-wife and daughter, he’d never see them again. Then again, love doesn’t much care for truth.

Ain’t Them Bodies Saints is sparse and slow. It’s dusky palate and hazy, starcrossed-outlaw-fairy-tale mannerisms will come off as pretentious affectations to those not gripped by paralyzing emotional attachment. Me? I’m sitting here days later still asking myself why I felt what I felt. In other words, nice on ya, Mr. Lowery. Hell of a film.