Home » Film » All in the Family 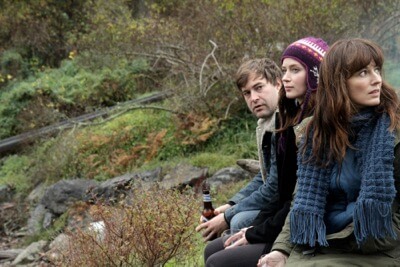 As she herself puts it, Lynn Shelton has made three movies in a row featuring three characters in one location. This goes a long way in explaining not only her priorities as a filmmaker (the actor is king) but also what her movies feel like: focused and precise but still subject to eruptions.

2008’s My Effortless Brilliance is a razor-sharp examination of two old friends, now grown apart with pent up neuroses, and a strange third party in a woodland cabin. 2009’s Humpday follows another pair of old pals who manage to turn an outlandish, drunken dare into an equally absurd, unspoken competition to see which of the two has been able to best avoid growing up.

Since Humpday, Shelton has directed an online project for MTV called “$5 Cover: Seattle.” She’s also landed a few high-profile TV jobs, directing an episode of “New Girl” this year and an episode of “Mad Men” last year. TV, where directors change frequently and producers, actors and writers hold much of the control, is quite different from Shelton’s brand of personal, low-budget moviemaking.

This may explain why her new film, Your Sister’s Sister, feels like such a refinement of her previous work. It’s as spontaneous and organic as the others but with a newfound layer of polish and without a single wasted moment in the whole 90 minutes.

Here’s how it unfolds. Jack (Humpday star Mark Duplass) is mourning on the anniversary of his brother’s death. His best friend, Iris (Emily Blunt), sees that Jack is spiraling into a void of self-pity and sends him off to her father’s secluded cabin, which is a bike trek and ferry ride away in the woods.

Upon arriving, he’s surprised to find Iris’ older sister Hannah (Rosemarie DeWitt), who has just left her girlfriend of seven years. Although she came to the cabin for her own regenerative solitude, she finds in Jack a welcome drinking buddy and strange bedfellow (literally).

It’s when Iris unexpectedly shows up to join them that things begin to really get tangled. Old loves begin competing with secret and forbidden loves. Unshakable sibling solidarity threatens to clash with the most devoted of BFFs.

Besides how spot-on these relationships feel, and how funny it is (this is Duplass’ best performance to date), what’s really interesting is the way it explores what actually differentiates a friend, sibling and lover and how it describes the different ways we interact with these roles and how we inhabit and exchange them for ourselves.

Duplass and his brother Jay have a similarly admirable body of work as directors under their belts, including this year’s Jeff, Who Lives at Home. Eager to team up with Shelton again, he brought the seed for Your Sister’s Sister to her. Shelton explains, “It was pretty much the launching point, like the kernel of the film.” But, “when [Jack] gets there, in [Duplass’] original conception, it was going to be the best friend’s mother he encountered. It would be a sort of mother/daughter twisted love triangle.”

This changed quickly, and so began the intensive process of improvising and brainstorming with the actors and of writing and rewriting the script. “We had about an eight or nine month period of development. I would figure out what was going to happen in the plot, but I was also talking a lot with the actors. Every two or three weeks we would convene on the phone and discuss the characters’ backstories. I wanted the actors involved in that, so they could feel invested in the project and also so they could just create characters that felt like a second skin that they could just put on, like a suit, and just be that character as naturalistically as possible.”

The original choice for the role of Iris, Rachel Weisz, had to drop out just a few days before shooting started. This is where DeWitt (Rachel Getting Married, “Mad Men”), came in.

“She caught up pretty quick,” says Shelton. “The good thing was that we had all that: we had the eight or nine months of development, and I wrote it all down. So I had this bible, which was each characters’ backstory and all the relationships in the movie. When we cast Rose, I was able to just transmit that. I was able to give her that and give her these 70 pages of dialogue, and the outline. But none of the dialogue was ever meant to be set in stone.”

She continues, “I basically told the actors, if you like a line, go ahead and use it. If you want to re-word it, that’s fine. Or if you want to go just completely off the grid, and just find another way to do the scene, that’s totally fine too. One of my kid’s old teachers used to say that her job was to create this very sturdy, very strong, but invisible container for the work to take place in. I really feel like I’m doing the same thing as a director and filmmaker: creating this emotionally safe space. And there are boundaries, there are very specific limitations, because I need all of this content to take place, and it has to be molded in some way.”

Your Sister’s Sister is the third film Shelton has shot on the more flexible and increasingly impressive HD video format, as opposed to film. “It’s really nice to have the endless takes. You don’t need to worry about stopping at all. I mean, I can shoot as long as I want, basically. I still love my films to end up on film. I would really rather see them projected on film, although it doesn’t really look terrible projected on HD either. But shooting on [film] is just so… I’d rather just put the money somewhere else, frankly, you know? Usually we’re going to have a limited budget. The cameras arereally great now, and you can get a really beautiful image on HD.”

That is proven early and often in Your Sister’s Sister, thanks to the images of her longtime director of photography, Ben Kasulke. He’s worked with her on nearly every project since she began and is just one of several longstanding collaborations.

“Geographically I love it,” Shelton says of Seattle, itself the biggest thread connecting all of her work. “But I also really love the filmmaking community, and I feel extremely rooted creatively and grateful towards it. I have this family of people that I’ve worked with; incredibly talented people, and we’ve all evolved together as artists.”

Such hometown teamwork will be on display again soon in Shelton’s newest project Touchy Feely, which stars DeWitt and Ellen Page, among others, and has just recently finished shooting. “I’m expecting to be premiering it sometime in 2013, hopefully at a festival of some note. And its a departure. [In Touchy Feely we have] an ensemble cast, multiple storylines… it’ll have a totally different feel to it, I think, and I’m excited about trying something new.”