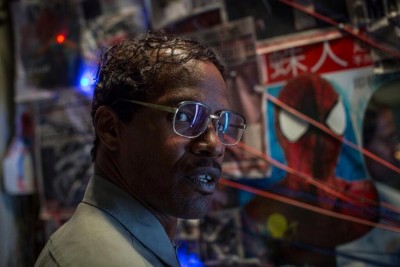 Spider-man’s new costume looks swell, and Emma Stone is charming. Those are the only two things about The Amazing Spider-man 2 I didn’t hate with the fiery anger of a thousand exploding suns. Every other performance, every last bit of dialogue and plot, every character beat, every joke, every garishly cartoonish action sequence can die a painful, prolonged death before languishing in the bowels of whatever hell is reserved for mindless, exploitive cash grabs masquerading as movies.

Screenwriters Roberto Orci and Alex Kurtzman are franchise serial killers, having parasitically attached themselves to Transformers and Star Trek, among others. That two living, breathing human beings can routinely produce content this noxious and vapid without remorse is almost impressive. Orci is a known conspiracist who believes 9/11 was “an inside job,” so he obsessively inserts sinister secrecy into everything he writes. Here, that means starting a Spider-man movie with a prolonged action sequence where Peter Parker’s father (Campbell Scott) fights to ensure the truth about governmental bioweapons gets out.

We then skip to Spider-man (Andrew Garfield) fighting The Rhino, played by Paul Giamatti, whose Russian accent makes Boris and Natasha from “Rocky and Bullwinkle” seem nuanced. The fight makes Peter miss his gal Gwen (Emma Stone) giving a graduation speech about death, a completely appropriate thing to talk about at commencement. Gwen and Peter are on-again-off-again because Pete feels guilty after her dying father (Dennis Leary) told him to stay away from her in the last film. In case you forgot, the chubby ghost of Dennis Leary frequently pops up, telling Petey to “quit touchin’ mah daughter!” with his dead eyes.

It’s hard to pick one worst moment, but here are some to consider: Gwen insists she join Spidey at the power plant because she “knows the schematics” and can turn the electricity back on, only to arrive and flip one giant, clearly labeled switch. Garfield’s spazzy, twitching delivery turns Peter from “troubled youth” to “mentally unwell.” Foxx’s character makes Urkel from “Family Matters” look like a babe magnet; it’s easily the most embarrassing thing he’s ever done, and he once played a character named Bunz in the film Booty Call. DeHaan’s hair, both before and after his goblin transformation, is a follicle hate crime. I have more…

The Amazing Spider-Man 2 is a dire warning of where our current superhero movie binge could lead. Offensively dumb, clumsily performed, lazily conceived, it is a descendent of the 1990s Batman sequels. To borrow from Aliens, this franchise (and Orci and Kurtzman) should be nuked from orbit, just to be safe. But hey, at least the costume looked neat.