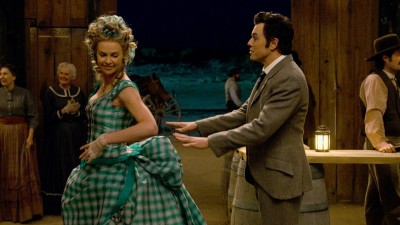 It would be easier to shrug off writer/director/actor/egomaniac Seth McFarlane’s blatant racism and misogyny if he was funny or had a point. Alas, he isn’t and he doesn’t. A Million Ways to Die in the West is McFarlane’s laborious love letter from himself to his own stupid face and is a continuation of his brotastic brand of “edgy comedy,” which is really just saying awful shit and coyly winking as if to say “ain’t I a charming stinker?”

No, but you do stink. And so does your movie. What’s more, your popularity is one of the many anchors fastened to America’s yoke as we dangle over an abyss of bigotry and violence against women. Let me explain.

A Million Ways is, above all else, a sex fantasy for brociopaths—thanks to comedienne/author Sara Benincasa for that term. McFarlane plays Albert, a shepherd in 1880s Arizona who gets dumped by Louise (Amanda Seyfried). We are told in no uncertain terms that this was a wholly unspeakable crime against Albert, who “did everything to make her happy” at the expense of his own happiness. She is labeled an idiot whore for betraying the nicety nice niceness of Albert. Except, Albert is a friggin’ loser. Not only is he a smarmy, weak-willed prick, he’s incompetent at his job and unpopular. Still, Louise owed it to Albert to stay with him and give him sex because, you know, he’s really nice.

Albert wallows with his friend, Edward (Giovanni Ribisi), and Edward’s prostitute girlfriend, Ruth (Sarah Silverman), a couple whose one-joke storyline could have been dumped to save a half hour from McFarlane’s endlessly boring self-indulgence. When Anna (Charlize Theron) blows into town, she agrees to help Albert win a duel against Louise’s new boyfriend, Foy (Neil Patrick Harris). Of course, she sees the nicety nice niceness of Albert as irresistible and cannot wait to reward him with sex. Only, she’s married to evil outlaw Clinch (Liam Neeson), who is an exaggerated version of how brociopaths like McFarlane see “other guys.” Basically, beautiful women like Theron should trip over themselves to bone guys like McFarlane because they are “good” and all other men are “bad.”

Don’t worry, McFarlane still finds time to joylessly and gracelessly jab at every race and religion possible. It’s almost impressive watching him shoehorn a Muslim joke into a Western. And by impressive, I mean “screw you.” Theron, whose work as a comedic actress isn’t praised enough, and Harris are the only things standing between this debacle and the lowest rating I can legally give. Maybe McFarlane was jealous of Harris’ scene-stealing and that’s why he wrote a bit where Harris has diarrhea in a hat (and we see it).

I understand that I’m expected to shrug the racism and misogyny off because objecting makes me a tightly wound, politically correct fool who doesn’t “get” that edgy comedy is totally the best. I couldn’t care less. McFarlane has proven time and again to be an unrepentantly racist, sexist moron who is about an eighth as clever as he thinks he is. A Million Ways to Die in the West is just more proof we should feel guilty we made him rich.