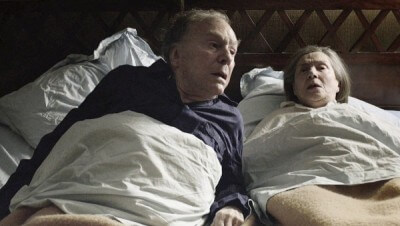 Oh, hell no. Why you gotta do us like that, writer/director Michael Haneke? Is life not already emotionally dense enough that you have to go and drop Amour on us just to remind us how finite and precious this human experience is? This is the sort of film you don’t watch first thing in the morning (because your whole day is shot wallowing in the reality of mortality) or last thing at night (because good luck sleeping while wondering how age will one day feast on you).

There isn’t a pleasant moment in Amour. Even when it is sweet, that sweetness is cyanide-laced. What Haneke has done is make the definitive modern end-of-life narrative. In a world where “more” has long been a synonym for “better,” we long ago stopped considering whether squeezing these future corpses we walk around in for a few more years of “life” is actually worth it. To see Amour is to think “maybe not.”

Georges (Jean-Louis Trintignant) and Anne (Emmanuelle Riva) love the shit out of each other. Now in their eighties, the couple is affluent, cultured and about to stare into the abyss. One day, over breakfast, Anne stops communicating normally. It is the first domino to fall, as her flesh rapidly decays, first paralyzing half of her body and then taking the rest of her mind. Her daughter, Eva (Isabelle Huppert), is sympathetic in her visits, but it is Georges who must deal with a new reality, which is one in which his wife evaporates in front of him while he cleans her diapers.

Amour sounds fun, doesn’t it? As unflinching as it is arguably important, Haneke’s movie comes at a pivotal time. Science is at a tipping point where it can provide the kind of long life that people mere decades ago couldn’t fathom without questioning whether it should. Amour explores this with nuance, as is evident in a haunting sequence of exchanges between Georges and a wayward pigeon. In some ways, this is a slasher film, with the aging process as “Jason Voorhies.”

There is no questioning the art on display, but entertainment is definitely lacking. On a scale of emotions, the needle moves from “sad” to “really sad” to “ensure no sharp objects are around.” What’s remarkable is that the year’s two best female performances come from the diametric opposite ends of life. Quvenzhané Wallis (Beasts of the Southern Wild) is 9 years old; Riva is 85. If there is justice in this world, the oldest or youngest performer in history will take home that trophy come Oscar night. Which lady you root for will depend on your preference: do you enjoy resilient and vibrant optimism or sophisticated and nuanced reality?

Amour is quietly devastating, importantly hard-to-watch and reluctantly crucial. The truth that it speaks is one that no one wants to hear, told in a way that few artists have been able to tell it. It is the most remarkable film achievement to ever make you want to take a shower while crying and wishing for immortality.