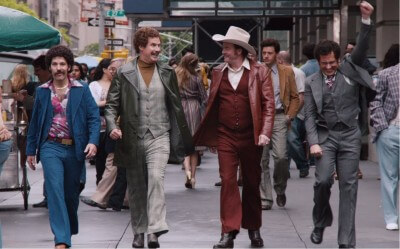 Arrogant, stupid, sexist, racist, cowardly, delusional, talentless and vile: Ron Burgandy (Will Ferrell) is the villain of both Anchorman and its sequel and nobody seems to remember that. Don’t believe it? He is a newsman who single-handedly kills the news this time out. And this is after he goes to a dinner with his new black girlfriend’s family and calls them “pipe-hittin’ bitches” to their faces. His excuse? “Well, to be fair, you invited me.” Thankfully, the beauty of satire doesn’t require the legions of fans who spout Burgandy’s catchphrases and ape his behavior to actually realize what they’re doing.

The first Anchorman was kismet, a collision of an unassuming concept and a talented cadre of comedians unafraid to go the limits of humiliation. But what was a surprise nearly a decade ago has grown into a comedic bubonic plague: like 90% of the population has been exposed. So Anchorman 2: The Legend Continues can’t just be funny; for most to consider it a success, it has to be “put newspapers down on the theater floor” funny.

Just like last time, the story is almost a nuisance. In the early 1980s, Ron and Veronica (Christina Applegate) are a successful husband-and-wife news anchoring team, until she gets a promotion and he doesn’t. Because he’s shallow and petty, he abandons his wife and son to wallow in whiskey. Then GNN comes along and hires him to do graveyard shift on their brand new 24-hour cable news station. Because he’s arrogant and stupid, he gets into a ratings war with a colleague (James Marsden) that results in him ruining the news and consequently destroying America forever.

What’s depressing is that the narrator has to explicitly remind viewers that the news didn’t used to be info-tainment. Once upon a time, average people were kept abreast of information necessary to the preservation of democracy and not “the top 10vaginas of all time,” as Brian Fontana (Paul Rudd) counts down here. Unlike the first Anchorman, this sequel has a point: an indictment of the corporate news whores who have eroded this country’s collective IQ.

The reason the racist, sexist humor in the movie is largely inoffensive is because the racism and sexism is used to make racist sexists look absolutely terrible. You don’t laugh at Ron yelling “Black” over and over again at his African American boss because the word is insulting or hurtful to her; you laugh because he’s the worst person imaginable. And maybe that’s why he is among the best comedic characters rolled out in the last 20 years.

Expectedly, they recycle all the jokes from the original, from Sex Panther to the epic news gang fight; but everything is dialed up to the proverbial 11, which was the only choice. The originality doesn’t come in the jokes, but in the decision to weld a rather tame and obvious point to some people (that news has become corrupt) to a movie that will be seen by people who may not have ever thought about that.