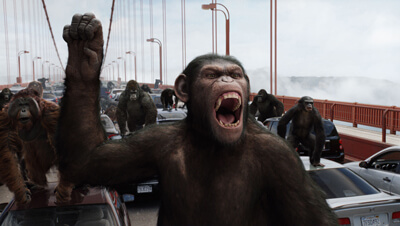 Bringing an iconic film back to life is no easy feat, let alone an iconic film series. Because no one seemed to be happy with Tim Burton’s attempt to remake Planet of the Apes in 2001, director Rupert Wyatt’s origin story, Rise of the Planet of the Apes, probably always had the odds in its favor. Thankfully, it didn’t need them. Despite its flaws, which are the usual heavy-handed trappings of science fiction, this is a sharp, well-made popcorn adventure of the best kind.

Although his miracle drug was intended to cure Alzheimer ‘s disease in humans, when Dr. Will Rodman (James Franco) tests it on monkeys, he discovers it not only heals the brain, it actually improves it. After his research funding falls through, the primate test subjects are promptly euthanized; however, Will manages to save one infant, which he names Caesar, with traces of the drug in his blood. Hidden away at home with Will’s father (John Lithgow), Caesar’s size, strength and intelligence increase year after year.

Caesar is eventually separated from his pleasant life with Will and forced to live with violent, unenlightened apes in a primate sanctuary. After a handful of heartbreaking visits from Will and plenty of abuses from the sanctuary staff, Caesar uses his brains to lead the other primates and incite what amounts to an ape uprising in San Francisco.

A well-tuned thriller, Apes one-ups other end-of-days pictures by putting us on the side of the hairy insurgents and leaving no doubt as to whether our species had it coming. True, Caesar is a nonviolent revolutionary, and he and his followers are trying to escape human society, not necessarily overthrow it. But Caesar’s fury is still intense, and Wyatt makes sure we share that anger with him for the entire second half of the movie.

As if Apes’ very serious script and execution could possibly allow anyone to miss it, this story of monkeys escaping captivity is a stand-in for any human uprising you’d care to choose. What’s most interesting in this context is that the apes’ oppressors are the humans of the present: us.

Of course, the apes themselves are what make it such effective blockbuster entertainment. Although the surreal, campy qualities of the original series’ makeup effects are missed, this new Apes is set in a recognizable present-day world and is served well by its realism. Celebrated motion-capture actor Andy Serkis, who played the titular primate in Peter Jackson’s 2005 King Kong and Gollum in Jackson’s Lord of the Rings trilogy, provides Caesar’s movements and mannerisms.

It’s as big and loud as any other action spectacle, and despite its inherent political undercurrent, Wyatt does keep it just light enough to avoid being overbearing. With so many reboots and remakes being churned out of Hollywood every year, Rise of the Planet of the Apes stands as a rare example of re-imagining done with imagination. It leaves one not only optimistic about the inevitable sequels but downright excited.