Home » Film » To Be Loathed and Not Feared 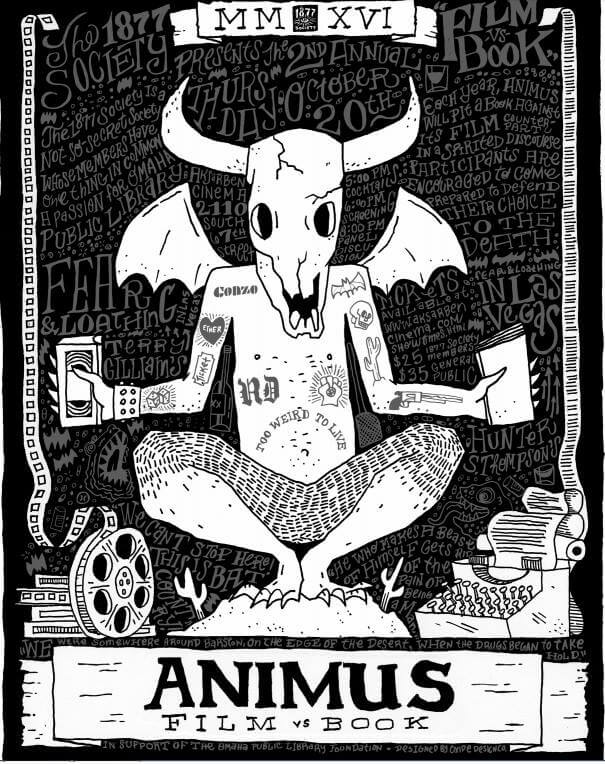 The 1877 Society—the coolest folks to ever form what sounds like an illuminati cult (but is really just a collection of library enthusiasts)—is hosting their second annual fundraising event, Animus: Film vs. Book. Proceeds this year will benefit adult literacy programs at the Omaha Public Library. On Thursday, Oct. 20 at 5 pm, Aksarben Cinema will host the super rad event, beginning with cocktails and themed appetizers. “What’s the theme?” you ask. I gotchu, boo. It’s “Fear and Loathing in Las Vegas,” so prepare to eat bat-inspired cuisine and a dish titled “The Pigs Were Gathering in Vegas.”

After the social hour fades into bliss-filled memories, Johnny Depp, a sentient pile of scarfs, dangly bracelets and hats, takes the screen, as the cinematic adaptation will be shown from 6-8 pm. Just prior, Kevin Simonson will discuss his personal experiences and interactions with Hunter S. Thompson, as well as some insights he has from having met the key players involved in the film adaptation of Thompson’s work, including the tale of how the film rights were transferred via cocktail napkin.

After the film, things get real, yo. Karen Pietsch, the manager of the Benson branch of the Omaha Public Library, will engage in debate by defending the position that the book “Fear and Loathing in Las Vegas: A Savage Journey to the Heart of the American Dream” is superior to the film. She will be debating me, a moron dumb enough to argue in defense of a film’s superiority to a work of literature at a library fundraiser, which will, I’m told, have attendees in the audience from a librarian conference that happens to coincide this year. I am going to lose. I am going to lose very badly. I am going to lose very badly…again.

But that’s not the point. The point is this is an absolutely top-notch event that helps fund a ridiculously important and noble cause. Last year’s inaugural debate was easily one of my favorite film-related engagements I’ve ever had the honor to participate in. The Q&A session with the audience last year reminded me again how lucky we all are to live in a vibrant community that is genuinely passionate about the arts. Even if that passion frequently manifested itself as rebukes towards me. Audience members are provided tiny flags for “Team Film” or “Team Book” to wave and vote with. At least, I’m told there are “Team Film” flags, but they are scarcely held aloft with pride, so they’re mostly myth to me at this point.

The tiny details are all remarkable, as the 1877 Society really does things right. From stunning limited-run original posters available for purchase (also part of the fundraiser) to displays that will feature part of Kevin’s personal collection of Thompson memorabilia, I cannot suggest strongly enough that you attend. 1877 Society members get tickets for $25, and nonmembers get them for $35, but that covers admission, appetizers, popcorn for the movie, and two cocktails. And, again, it goes to a really great cause.