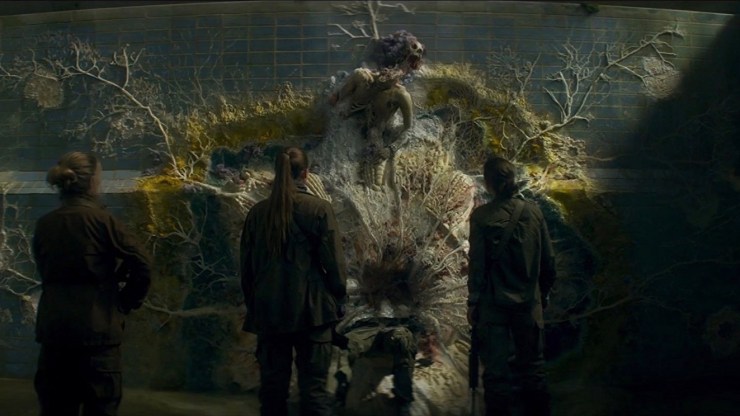 The bible describes angels as so mind-meltingly unfathomable to humans, the first thing they always say is “You gotta chill out, I’m cool. I promise and stuff.” Scientists conclude that the actual appearance of any potential alien or interdimensional life would neither resemble Alf nor any of the primary-hued sexy space ladies Captain Kirk sleezily tries to Kobayashi in the Maru. And yet, most mainstream cinematic speculative fiction refuses to traffic in the absurd and impossible. Delightfully, writer/director Alex Garland’s Annihilation ain’t scurred of the surreal. Terrifyingly beautiful and gorgeously horrific, this lightly plotted sci-fi gem is the kind of brilliant nonsense that gives studio executive ulcers and fans of limitless imagination the tingly-tummy opposite of ulcers.

Based on the novel by Jeff VanderMeer, which is apparently even more enthusiastically abstract, Annihilation begins with the sky barfing a circular rainbow around a lighthouse. Nicknamed “the Shimmer,” its surface area is constantly expanding, and anyone who goes into the affected space doesn’t come out. Until someone does… Lena (Natalie Portman) is a smartypants Harvard biologist mourning the disappearance of her husband, Kane (Oscar Isaac), a soldier she presumed died on a secret mission. Then he just kind of shows up in their bedroom and starts emitting blood from all sorts of places.

The evil double-secret shadow government shows up and takes Kane. Lena is determined to figure out what happened and save her husband. So she convinces Dr. Ventress (Jennifer Jason Leigh), who is in charge of the Shimmer missions and an firm 11 on a 1-10 scale of creepy-intense, to let her go on the next expedition. In the film’s clunkiest bit of unneeded overexplaining, we’re told only women are being sent in this time by choice, as though simply having a squad of qualified women enter would have broken brains more than the shimmery rainbow fart they’re investigating. Anya (Gina Rodriguez), Cass (Tuva Novotny) and Josie (Tessa Thompson) join Lena and Ventress on their sure-to-go-really-awesome mission, which does not go really awesome.

Annihilation is as much about what it means to be human as it is about decidedly non-human shenanigans. Although Lena’s infidelity makes her motivation a bit one-note, the film attempts a meditation on the flawed-but-worthwhile cycle of love and sorrow, not unlike Arrival. Portman and Isaac somewhat undersell their relationship, with a bit too much “flashbacks of tickling whilst wearing underpants in bed” and too little “do they actually love each other?” That said, the entire cast does a helluva job negotiating the believability of reacting to the unbelievable.

The unbelievable is actually the star of the show. Although some sights inside the Shimmer are designed only to encourage diaper deposits, most are a lyrical blend of alarming and pretty. The film’s final third takes full advantage of the quiet previous acts, ending in a crescendo of sight, sound and vanishing sanity. Annihilation is strange in the most complimentary form of that descriptor. It is borderline profound, a singular experience and the kind of escapist fiction that truly liberates audiences from the oppressive weight of mundane reality.