Home » Film » Hunger Is No Game 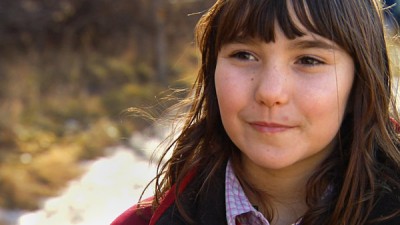 We let people in this country go hungry. That’s the take home message of A Place at the Table, the new documentary from directors Kristi Jacobson and Lori Silverbush. It is a staggering and completely honest statement. See, if the problem were a food shortage, nobody could make such an accusation; but this isn’t supply and demand. We have plenty of food in America, and yet we let millions and millions of citizens, mostly children, go hungry. Why?

Like all truly effective documentaries-of-purpose, Table launches a three-pronged attack: statistical overload, emotional appeal and call to action. Initially, animated graphics soften the blow of a brutal fact blitz. You hear things like 1 in 6 Americans are “food insecure,” which means they don’t know where their next meal will come from. Oh, and 85% of those families that are food insecure have at least one working adult; they are not “deadbeats living off the system.” As if that weren’t enough, they hit you with three whoppers: 50 million citizens rely on charitable food programs, the average food stamp benefit is less than 5 dollars a day, and half of all kids in the United States will be on food assistance at some point. Yowza.

Then the film transitions to emotional context. We meet a fifth-grader named Rosie who admits to sometimes daydreaming in class out of sheer hunger, envisioning her teacher as a banana and her classmates as edible. It’d be funny if it wasn’t completely tragic. Rosie’s teacher, Leslie, knows that it affects her in class and tries to help by giving food out to the community. So does pastor Bob, who uses a trailer to distribute goods, some of which are accepted by a full-time police officer who can’t afford enough food because budget cuts haven’t raised his salary with inflation. And then there are the well-spoken, passionate mothers watching their children burst into obesity because chips are the only thing they can afford.

And then the activism: It’s all politics. Jacobson and Silverbush point to government subsidies to farmers that promote food used in unhealthy products. They demonstrate congress’ obsession with dollars and cents over feeding starving children, as a representative asks in response to being told the scope of the problem if anyone knows how to pay for it.

The truth is, we’re all paying for it. A Place at the Table isn’t a film; it’s a wake-up call. It’s a brick through the window reminding us that the last time America stood against hunger, in the 1970s, we largely won. But then we stopped fighting. It’s this year’s Inconvenient Truth or Waiting for Superman, in that it doesn’t work as a movie so much as a badly needed lecture that will only be heard by those already predisposed to help. Hey, you know how congress jointly watched Spielberg’s Lincoln last year? Just a thought: somebody slip our representatives some footage of bright, adorable Rosie talking about how her family’s stomachs all talk to each other and see if that does any good.