Home » Film » Object of My Affleck-tion 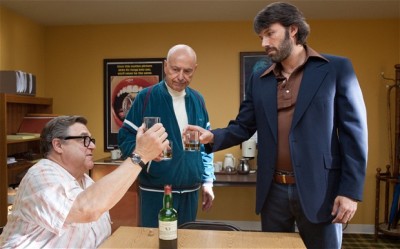 It’s easy to thrill people when they don’t know what’s coming. Okay, maybe not easy—paging Mr. Shyamalan—but certainly less difficult than whipping up tension in a film based on a decades-old actual incident, the resolution of which is but a Google search away. Between that and having to painstakingly recreate 1970s mustaches, actor/director Ben Affleck’s Argo faced several hairy problems. But for the third consecutive time, Affleck directs a home run, a feat his beloved and underperforming Red Sox are no longer familiar with.

Complete with a retro Warner Bros. logo, Argo is every bit a 1970s endeavor, not just in its setting but in its channeling of Sidney Lumet-esque filmmaking. In a clever, thorough but non-preachy opening sequence, the motivation of the 1979 siege of the U.S. Embassy in Iran is distilled into easily parsed context. Basically, Iranian revolutionaries used the American hostages to barter for the return of their corrupt former leader who was in exile stateside. Except, six of the embassy workers got out and hid at the house of the Canadian Ambassador (Victor Garber).

One does not simply walk into Iran, so intelligence agent Tony Mendez (Affleck) concocted what remains the single most “oh, no they didn’t” insane spy operation in history to retrieve them. With the aid of Hollywood producer Lester Siegel (Alan Arkin) and special effects guy John Chambers (John Goodman), Mendez created a fake movie studio making a fake movie supposedly looking to shoot in Iran and convinced the real Iranian cultural department that the six real Americans were fake Canadian filmmakers. Let it sink in that this really happened.

Honestly, what Argo doesn’t do is almost as brilliant as what it does. Screenwriter Chris Terrio resists the urge to over-develop the characters of the six escapees and refuses to turn Mendez into either a tortured genius or superhero. Everything is tighter than a bad girl’s dress on prom night. Even the bureaucratic bickering from high-ranking officials like Jack O’Donnell (Bryan Cranston) and Hamilton Jordan (Kyle Chandler) are whittled down to their most breathless pace.

Argo is a masterclass in how you can use editing to shape reality into drama. Jam-packed with the same tense feelings you get from con-man movies or heist films when you think the plot is about to be foiled, the thrills are simultaneously diminutive and epic. Instead of car chases, hearts race as a phone goes unanswered. Instead of a shootout, the film climaxes with a discussion about fake science-fiction storyboards in Farsi.

Still, there really isn’t a legitimate standout performance here. Even Arkin, who is receiving Oscar buzz, is just muted comic relief. And there’s no grand message to be gleaned. This isn’t an affirmation of the power of film or an indictment on political practices. It’s just a crackerjack thriller based on true events, which, to be fair, is damn hard to do.

After Gone Baby Gone, I predicted that Affleck’s career as a director would obliterate his acting work and that he would one day eclipse the much-heralded chair-talker Clint Eastwood in the pantheon of actors-turned-director. What I couldn’t have predicted is that he’d do it in just three films.