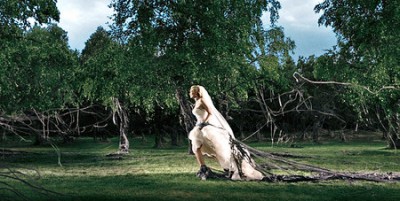 Writer/director Lars von Trier hates earth and everyone on it. Don’t believe it? See Antichrist.

Maybe that’s why Melancholia, a film that eventually gets around to pondering the end of the world, feels a bit more like a fantasy than a nightmare. As one of his characters ponders the extinction of the planet, she sums it up in von Trier’s patented lyrical nihilistic minimalism, stating simply “No one will miss it.” So there you have it: if you’ve been looking for a gorgeous, ponderous, somewhat self-loathing apocalypse, look no further.

Melancholia begins with a gob-smacking, flawless first few minutes that combines slow-motion, orchestral fanfare and the aforementioned annihilation of earth. The sequence is less like film and more like a painting in motion. Think Kanye West’s video for “Power.” Come to think of it, given the sheer volume of narcissism and ego involved, it may be best not to put von Trier and West in the same paragraph. This opening is a metaphor for the experience of watching the entire film, in that it is somehow simultaneously depressing and anticlimactic and yet inexplicably captivating as all hell.

The story is divided into two chapters, each named after one of the two main characters, both of whom suck at life. First up is Justine (Kirsten Dunst), who is marrying Michael (Alexander Skarsgård), even though she doesn’t seem to like him much, a point she drives home by boffing another wedding guest on a golf course. Her entire segment is a baffling blend of near-comedy and monotonous conversation, with nary a peep about armageddon.

When the film shifts to the second chapter, dedicated to Justine’s sister, Claire (Charlotte Gainsbourg), things take a turn for the apocalyptic. It turns out that Justine’s depression is tied to Melancholia, a planet that was “hidden behind the sun,” and is now bearing down on earth. Claire’s tool of a husband, John (Kiefer Sutherland), tries to assure everyone it will all be fine, but we’ve seen the film’s intro, so we know a ‘splosion is a-comin’.

von Trier is a frustrating filmmaker, full of self-important piss and vinegar that bleeds into his work, but that doesn’t mean that his challenging art isn’t worth exploring. For example, the first hour of Melancholia contains a fascinating portrayal of depression by Dunst, and features some interesting nuanced commentary on rituals and the folly of a work-driven life. It’s also kinda boring. The second hour is full of cataclysmic imagery and mournful contemplation about the human experience. It’s also kinda boring.

Unlike Terrence Malick’s Tree of Life, which was obtuse but invigorating, the whole point of Melancholia is soul-crushing sadness. Two planets smacking together may not sound like a whimper, but it may as well make one. This isn’t to say that the film isn’t worth watching, that it isn’t well acted by Dunst and Gainsbourg or that it isn’t haunting. It is. It’s just that, if you want a meditation on the meaning of life, Malick’s film is better. If you want a chilling apocalyptic tale, Take Shelter is still out there. But if you want the grim, semi-navel-gazing offspring of those two, Melancholia it is!