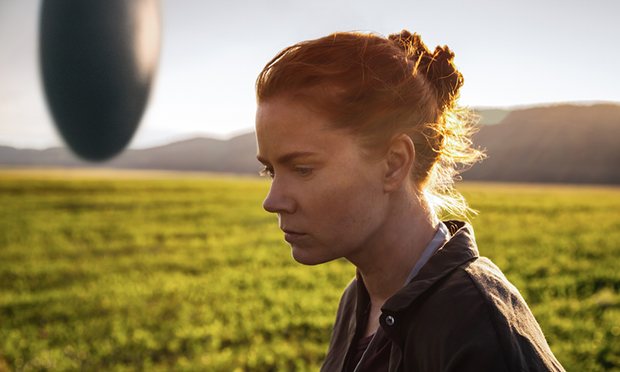 Good science fiction makes you ask hard questions. Things like “What is the true core of human nature?” and “Do they really expect us to believe Jeremy Renner is smart?” Writer Eric Heisserer and director Denis Villeneuve’s Arrival is by no means a perfect movie. Again, it seriously presents Jeremy “For real, tho, you see J-Lo’s boobies?!” Renner as a scientist, albeit one prone to frequent mansplaining, which is the only part that tracks. And yet, Arrival is a delicate, thoughtful meditation on nuanced subjects that aren’t even hinted at in the trailers. Sloppy though it may be, the sum of its parts is emotionally staggering.

Amy Adams plays Dr. Louise Banks, who must be the highest compensated academic linguist in history, given her living accommodations. One day, alien beings that look like giant, wrinkled old-man hands park their kidney stone-esque spaceships above 12 sites around the world. When they start trying to talk to humans, using sounds resembling Yo-Yo Ma trying to play the brown note, Banks is called in by Colonel Weber (Forest Whitaker) to translate.

Don’t worry, it’s not like they’d let a lady be in charge! She still has to report to Dr. Physics Math Scientist Ian Donnelly (Renner), whose dialogue sounds like an intern Googled “how to say smart stuff.” Together—and by “together,” I mean she does all the hard work and he watches—they begin to communicate with the intergalactic beings. But will it be in time? Or will Russia and China start nuking stuff just to nuke stuff? This is pre-Trump America, so we don’t nuke first.

What’s amazing is that none of this is really what Arrival is about. Sure, all of it is a big part of the plot, but the concrete narrative elements bend and bow to what winds up being the film’s central question: If you knew that the best thing that ever happened to you would also mean the worst thing that ever happened to you, would you do it anyway? The very best fiction that tackles massive moments like alien invasions or zombie apocalypses often places intimacy above spectacle and scope. The climactic decision in Arrival is about nothing more than a mom and her kid. It’s gut-wrenching and so very beautiful. Despite Jeremy Renner.

Some people will not like Arrival for completely understandable reasons. Some logistical things are super wonky, like the ability of soldiers who are part of a world-changing, top secret crisis being allowed to just call home and shoot the shit. The narrative twist rolled out in the final act can also be kabobbed with questions pretty quick-like. But the ambition and audacity of a major motion picture to tackle what it does, how it does, should not be underappreciated.

Arrival brought me to the brink of tears several times, and not through cheap gimmicks or narrative trickery but through simple, universal questions about the inseparability of heartache and love. Cheeseball dialogue and farty casting be damned; if a movie makes you feel and think this much, it’s really damn good.