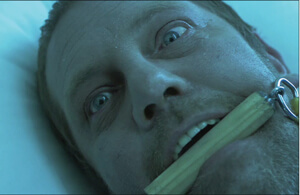 It’s 2010, which means everyone with a modem has stumbled across a video they wish they hadn’t seen, a movie depicting an act so vile that we thought they were urban legend; we couldn’t believe people actually did that — until we watched it. Our collective innocence fled sometime between the viral videos “Two Girls One Cup” and “Man Beaten to Death With Hammer.” Horror movie plotting is almost impossible when your audience has seen it all, and that’s how we find ourselves watching movies like The Human Centipede, a film based on a concept that would’ve grossed out serial killer Ed Gein. The film begins with the twisted Dr. Heiter (played by the awesomely named Dieter Laser) hunting for his next victim. Dr. Heiter is a world-renowned German surgeon who specialized in separating conjoined twins before retiring to follow his ironic dreams. Unfortunately for everyone within arm’s reach, Pompano Beach and crossword puzzles were too passé for Dr. Heiter, who instead prefers to spend his golden years sewing animals together, in an anus-to-mouth (ATM) fashion, to create a centipede-like creature that shares a single digestive tract. Opportunity came a’ knocking one evening when generic American tourists Lindsay (Ashley C. Williams) and Jenny (Ashlynn Yennie) get lost in the woods in their rental car and suffer a flat tire. Although Centipede sounds like it should be the cinematic equivalent of a G.G. Allin concert, the film shows some restraint. Director Tom Six spares us most of the gore and scat, leaving out the grossest parts of his film in an attempt to elevate torture porn to new, surgical, levels. But let’s not kid ourselves, this film is loaded with enough muffled screams to remind us that no matter the aesthetic intent, we’re still watching torture porn. The Human Centipede’s best parts are its germ of an idea (which may not have been imagined to its full horror potential) and its villain, who looks like an evil, rail-thin version of either Statler or Waldorf, the elderly heckling Muppets. He was such a fantastic character that I wouldn’t mind seeing more of him, maybe cast in a reality show or traveling the world filming a travel documentary. Laser’s frothing and hand-flapping performance, which gets more amusing with multiple viewings, adds a surprising black comedy element to The Human Centipede. His “victory dance” (found in one of the DVD’s deleted scenes) is required viewing — all of the other DVD extras (including Six’s vapid commentary) can be skipped. Whereas Hostel may have made viewers concerned about budget European housing, Centipede is too wacky, too far out to allow someone to be legitimately scared about being sewn ATM with their best friend. If you choose to rent this 21st century version of Frankenstein, remember two things: Netflix was made so that you can avoid the thinly veiled disgust of a Blockbuster employee during in-person rentals. And plan your viewing day accordingly: don’t bother loading the slow cooker with chili that morning. GRADE: B-