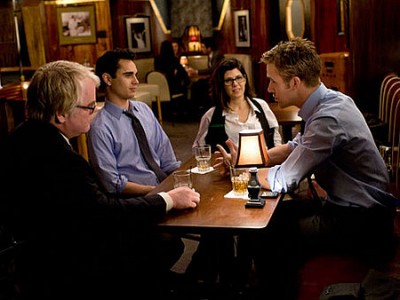 A reminder: Bobbing for apples in a sports stadium urinal trough may be less vile than becoming a professional politician. If Aaron Sorkin’s sorely missed “West Wing” was a weekly fairy tale of governmental grace, The Ides of March is a campfire ghost story where every player is the bogeyman. Populated exclusively with characters only passingly familiar with the definition of integrity, the film is a feel-bad reminder that modern American politics is little more than a street fight that takes place in a moral sewer. So, even though the movie is “good,” you won’t leave feeling that way.

The master of the smoldering grimace and owner of an indecipherable East Coast semi-accent, Ryan Gosling, plays Stephen Myers, a hotshot campaign coordinator blessed with a Midas touch for media relations. Working beneath his astonishingly frumpy mentor, Paul Zara (Philip Seymour Hoffman), Myers has helped his candidate, Governor Mike Morris (George Clooney), ascend to the top of the Democratic primary race. But the Machiavellian Tom Duffy, who runs the campaign for the last remaining challenger, has a plan to fix things, which begins by wooing Myers to work for him.

Although he had just told reporter Ida Horowicz (Marisa Tomei) of his Mr. Smith Goes to Washington‒esque devotion to Morris, Myers decides to take a meeting with Duffy. Perhaps he wasn’t thinking clearly because sex-kitten intern Molly Stearns (Evan Rachel Wood) has his blood flowing to a spot many  entitled male political figures find their blood flowing. The unwise conversation with Duffy dovetails with Myers’ unwise boot knockin’, setting off a chain reaction of progressively horrible implosions. By the end, there’s no one left to root for and no outcome that feels just: so, it’s pretty much politics as usual.

Directed by Clooney, who also co-wrote the screenplay with Grant Heslov and Beau Willimon, The Ides of March is a crackerjack ensemble flick that builds genuine tension through moral impropriety and conversation. While Giamatti and Hoffman try to out-rankle each other, both masters of the crumpled button-down shirt and imposing paunch, Clooney classes up the joint with his authentic presidential air. In fact, his comfort during the faux debates and town hall meetings seems to suggest there may be a D.C.-based second act to Clooney’s career. Gosling, meanwhile, does what he does best: frowning with authoritative force.

Beyond the lack of a single even moderately redeemable character, the biggest issue with The Ides of March is its familiarity. There seems to be no reflexive criticism beyond “politics bad,” and the foibles faced by the parties involved last felt “fresh” when that word was still part of Will Smith’s name. And then there’s the troubling way in which the only real female character, Molly, is handled…but such conversation requires mega-spoilers.

All that aside, The Ides of March does deliver A-list talent clicking at fast clip, as Clooney once more proves himself capable of directing the same quality of performances he is capable of delivering. Tautly paced and never boring, this is the best time you can have while being reminded how wretched our governance can be.