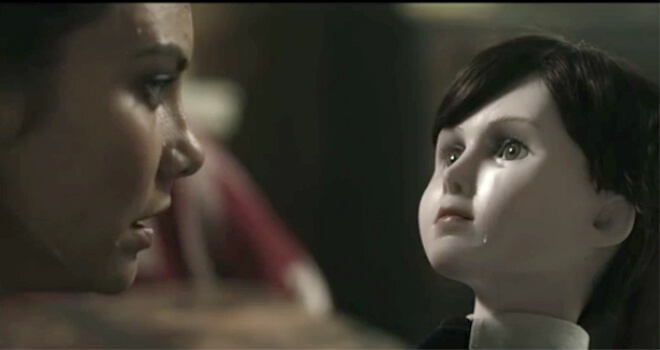 Director William Brent Bell almost certainly envisions The Boy to be the ultimate creepy doll movie, relishing in all of our favorite creepy doll movie moments. I almost enjoyed a few scenes of the creepy doll turning its head slightly, moving around rooms, apparently walking down hallways and the many waist-high POV tracking shots. Almost. For the most part, The Boy is dull PG-13 horror that’s less of an actual movie and mostly just something safe for teenagers to do on a Friday night.

Really, the only positive about a cinematic dumpster-fire like The Boy is that it gives more work to a great actress like Lauren Cohan, who plays Greta, an American nanny who travels to the United Kingdom to care for a “young boy” that she quickly realizes is actually just a creepy doll. Cohan keeps the watchability of The Boy firmly in tact while she manages to ground the absurdity around her. Creepy doll movies, however creepy, are inherently silly. Cohan isn’t afraid to play it straight when a creepy doll arrives at her bedroom door and serves her PB&J.

I could have done just fine without a lot of the other nonsense. There’s a shopkeeper played by Rupert Evans who creates an unnecessary love interest. His only real purpose in The Boy is to occasionally show up and shame Greta for being hysteric when she claims that the creepy doll she’s caring for may actually be alive. An entire subplot revealing the fates of the creepy doll’s so-called “parents” is some of the hammiest horror not directed by Shayamalan.

Perhaps the biggest fudge-up of The Boy is the painfully awkward inclusion of a character named Cole, Gretas’ abusive ex-lover, who shows up because The Boy isn’t so confident that a creepy doll can feel threatening for too long. I realize that The Boy is not just a horror movie, but a horror movie released in January. However, introducing a domestic abuse dynamic halfway through the movie to create cheap tension is some all-time lazy storytelling. What’s really terrible is that I can’t tell you much about the big twist of The Boy, other than that it’s unintentionally hilarious.

Right about this time every month, I always hear a lot of people saying, “I can’t believe the month is already over.” January 2016, is almost over and I can totally believe it. The night is darkest just before the dawn, and moviegoers will be forced to brave The 5th Wave and The Boy this weekend. Be patient, folks, for February is coming.

Maybe take the awful new wide releases this weekend as a sign that you should check out what’s playing at your local specialty theater. Don’t go see The Boy, though, because certainly no good will ever come of that. Instead, if you’re looking for a good scare, just visit a nearby antique shop look at some of the creepy dolls on sale. A few seconds of eye contact with the black beads of porcelain death should be much scarier than anything in The Boy.